Kerala has long been associated with elephants | Mathrubhumi photo

Kerala has been known for its dramatic conundrums and paradoxes. Both of the positive and the negative kinds. Among them is the celebrated Kerala Development Model itself, which helped the state achieve social advancement even when it remained economically backward. Among the negative paradoxes are the coexistence of women’s empowerment and extreme patriarchy; progressive politics and regressive social norms; publicly held secularism and privately practised sectarianism etc.

A state which embraced modernity during the 19th century through the renaissance movement that spearheaded the struggles for women’s rights has in the 21st century witnessed a mass movement to block their entry to a temple because they menstruate! It was led not just by the obscurantist BJP but also by the nation's most secular party, the Congress. The Communist-led government which initially proclaimed to open the temple doors to women, turned tail subsequently, stung by the growing opposition. Interfaith marriages are condemned as Love Jihad or thwarted by murdering the lower caste man who dared to marry an upper caste woman belonging to even “caste-less” religions. Progressive and secular political parties either kept silent or endorsed.

Look at the ongoing election campaign in the Thrikkakara by-poll. While the Left candidate is picked for his religious identity, the Congress candidate, who is the wife of a departed leader who openly defied religious leaders, pays obeisance to all the religious and caste lords of the region. BJP which cries hoarse about the Left’s and Congress’s minority appeasement is happy to lead one minority community to abuse the other.

Another abominable Kerala paradox is now being globally noted in dismay and shock. Kerala's elephant paradox. Kerala has long been associated with elephants. It is one of the largest habitats for Asian elephants and India’s largest house of captive elephants (18%). The elephant was the official symbol in both Kochi and Tiruvithamkoor during the royal days and the State Animal after independence. No festival in Kerala is complete without the jumbos; Malayalam literature abounds in elephant tales; legends are galore on the famed tuskers which are household names; many families for generations specialise in elephant treatment and taming (aanappavu); men proudly wear their “aanakkambam” on their sleeve; upper-caste families boast about their ancestors who reared tuskers to claim past glory. They trumpet, “Ntuppuppakk oraanendarnnu”, according to the inimitable Vaikom Muhammed Basheer!

Kerala claims to adore and revere elephants. Yet, it is also now being known globally as the worst hell for the sentient and intelligent animal. The rise in the frequency of incidents of captive elephants being brutally exploited and tortured in the name of religion, entertainment, and commerce have stunned animal lovers and environmentalists worldwide. Known for its progressive and humanist traditions, Kerala is also billed today as a society practicing primitive barbarism on elephants. This story of Kerala's inhumanity has been most comprehensively chronicled by a woman who has dedicated herself to rescue the state’s hapless elephants. She is Sangita Iyer, a Kerala-born and Canada-based environmentalist, animal rights activist and filmmaker. 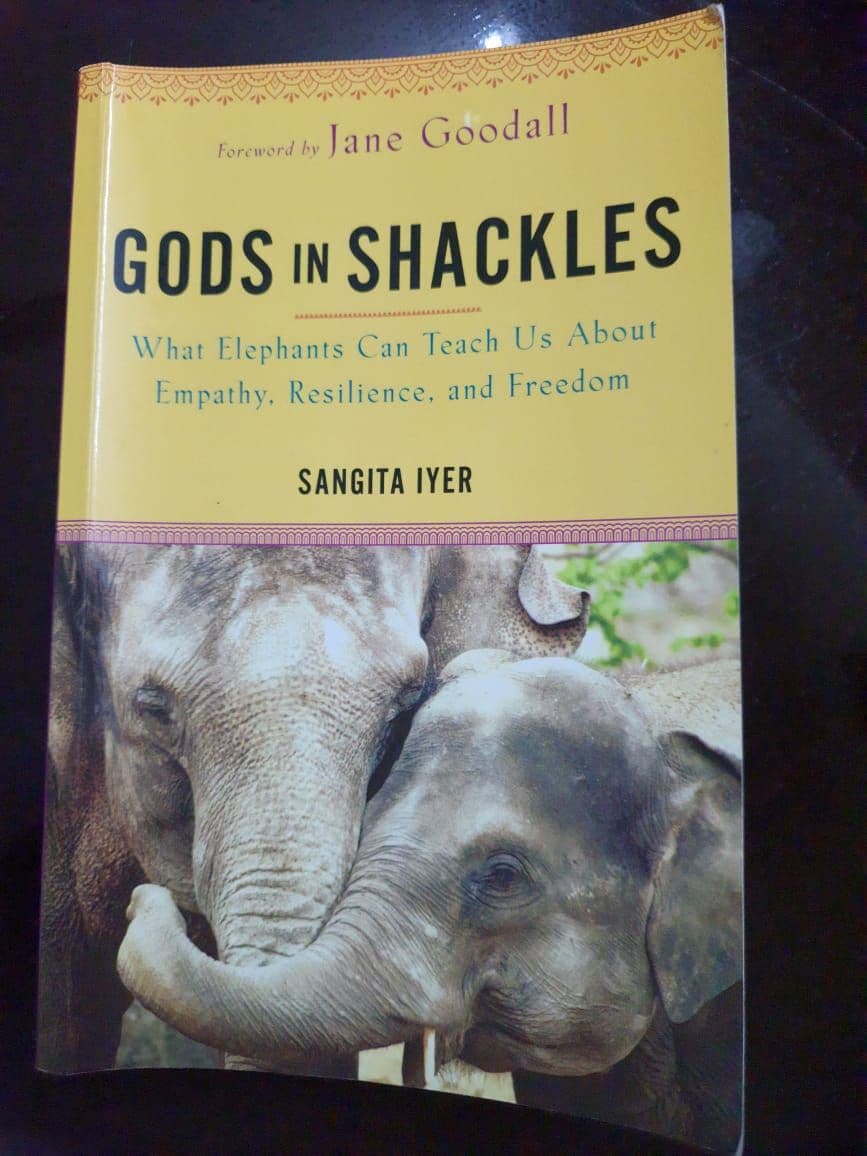 Iyer’s universally acclaimed documentary -Gods In Shackles- (2018) on the sad plight of Kerala’s captive elephants was the first major work that brought world attention to the sordid saga. Today, her book named the same (Hay House Publishers, 2022) has documented the story in more detail and is emerging as a universal bestseller. Like her film, this book narrates in horrific detail how elephants in Kerala are being “brutalized” (when humans turn crueler than brutes, is the word apt anymore?) in the name of religion, entertainment, business and even love! Africa and Asia are the habitats for the two major species of the animal. Yet, their population fell from a few millions at the turn of the 20th century to 3.5 lakh in Africa and from less than a lakh to 40,000 in India. While they are tortured and killed for ivory in Africa, they are captured, domesticated, and tortured for religion, entertainment and profit in Asia, especially in India. Strangely, Lord Ganesha's India is the country where elephants are traditionally revered! Iyer parallels this with India’s ill-treatment of her women even while they are revered as goddesses.

Kerala houses about 400 of India’s 2500 captive elephants, which make about 18%, and have the most sordid tales of elephant torture which are directly violative of existing laws and ethics. Yet, the barbarity has been kept under wraps through an organized conspiracy of silence caused by religious considerations, profit motives, and sheer fear of political and social backlash. As Iyer pens passionately, elephants are “stolen from the wild, ripped apart from their close-knit families, brutalized to submission and forced to perform unnatural tasks”. During 2015-17 as many as 70 captive elephants died in four Indian states owing to “unnatural causes”. In Kerala, the toll was 35 in 2018 alone - three per month! Reasons were torture, neglect, overwork, and faulty management. This is despite elephants having been included from 2010 in Schedule 1 of the Wildlife Act of 1972 as an endangered species and heritage animal that needs rigorous protection and granted protection from killing, poaching, and trading.

It is no secret that Kerala’s most captive elephants which are celebrated as “icons of Malayali tradition and culture” including rockstars like the "India's tallest" -Thechikottukav Ramachandran- were actually bought and brought from Assam or Bihar. Iyer documents in horrid detail the suffering and agony perpetrated even as we pretended to adore them on many of our celebrated tuskers like Ramachandran, Triprayar Ramabhadran, Guruji Padmanabhan, and so on. She also narrates their abominable plight during festivals which are theatres of agony with the milling crowds, blinding light, and deafening noise to which the elephants are too sensitive. The primitive ways they are shackled, herded and bundled in trucks, made to walk for miles on hot tar roads, tethered without enough water and food under heavy iron chains for many days causing deep injuries, castrated to kill their primordial instincts, brutalized during their musth, tamed barbarically through the Kerala-special Katti Adikkal, etc. Iyer lambasts the so-called “elephant enthusiasts” who cause only agony for the animals even as she recognizes the work and struggles waged by a few activists, officials, researchers, and so on in Kerala for the cause of elephants like the late Sugathakumari, Akkeeraman Kalidasa Bhattathiripad, VK Venkitachalam, Raman Sukumar, Surendra Varma, Suparna Ganguly, Jacob Cheeran and so on.

Iyer boldly names the leaders and officials who turn blind to the torture, the veterinarians who issue fake certificates, the appalling conditions at the celebrated Guruvayur Captive Elephant Centre or the state-run Rehabilitation centres. She explains how no religious scripture calls for or endorses the use of elephants for festivals. The book is also Iyer’s personal journey and discovery. She draws a striking parallel to the plight of elephants with her own personal trauma as a girl child, sexually abused and socially silenced by Kerala’s patriarchal traditions.

Kerala’s sad saga of elephant torture has crossed all limits with the state’s recent economic prosperity fuelled by Gulf money. This has caused a rise in the number of festivals (of all religions) and their extravagance. There are as many as 3000 Hindu temple festivals every year now. “Jumbo Parade” has become a prestigious rule and temples compete for the highest number with many dignified animals made to stand with the names of the sponsors hanging from necks. This has spawned a ruthless and crassly profitable elephant industry. Owning, contracting, and renting elephants is a money-spinner with owners of famed tuskers making as much as Rs 7 lakhs a day. Elephant Owners' associations thrive with political and religious patronage and smother every voice of protest.

This writer remembers the hostile reaction to a TV series on the torture of captive elephants made a couple of years ago inspired by long conversations with Iyer and watching her “Gods In Shackles”. We were showered with choicest abuses, called us anti-Hindu and the elephant owner-contractor lobby organised a protest march before our office and even presented us with a token of death. (Wonder how a lone and relentless activist like Venkitachalam survives in Thrissur’s killing fields!)

Iyer’s book has been released when Kerala celebrated this year’s Thrissur Pooram, the state’s most extravagant elephant show, after a two year break caused by Covid-19. It has a particular chapter on Pooram-“The Abomination That is Thrissur Pooram.” The cruelty and primitivism perpetrated on hundreds of elephants during the Pooram are narrated in shocking detail. Wonder how would posterity assess this barbaric show conducted as Malayali’s greatest festival at the expense of extreme agony and suffering for the elephants. It is the most traumatic experience in an elephant’s life on account of milling crowds, long hours of standing on its sensitive foot carrying heavy weight on its tender spine, suffering what it hates most- the summer heat, deafened and blinded by the horrendous noise from the drums, the fireworks, and lights while the gentle animal abhors.

A two-year break in holding Pooram made Malayali throw to winds every word of caution and restraint from courts, officials, health experts, environmentalists, or animal lovers on its conduct. The media too, driven by the commercial potential, forgot the dangers it used to point out until a few years ago. Gone were the days when a media organisation boldly ran a campaign citing Sree Narayana Guru’s call, “Kariyum Venda Karimarunnum Venda” in the aftermath of the fireworks accident at the Puttingal temple in Kollam which killed 111 in 2016. Instead, today channels mired for days together in Pooram passion, did live for hours blanking out all important news and their loquacious commentators frothed over the childish and tacky Kudamattam. Even the rising fundamentalism lurking in the shadows was evident this time with Savarkar’s picture adorning a Varnakkuda even when Narayana Guru or Ayyankali was conspicuously absent.