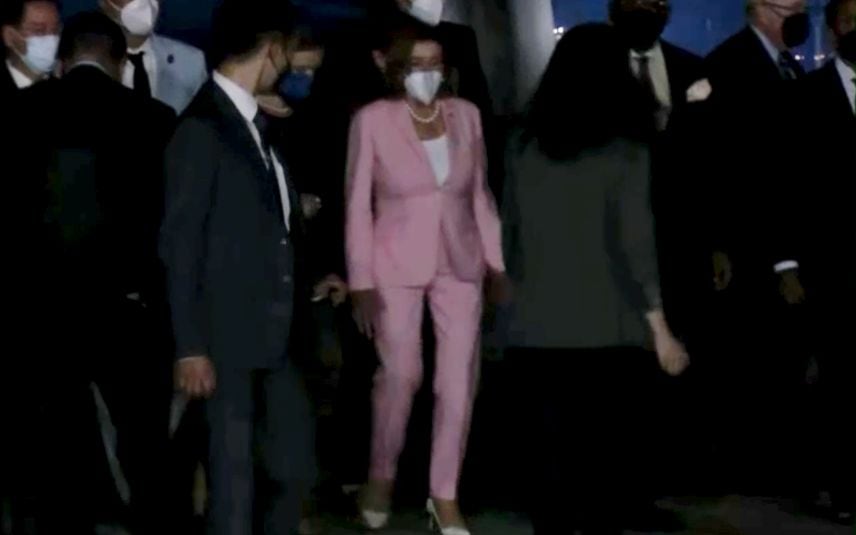 Beijing: China Tuesday warned that US House Speaker Nancy Pelosi's visit to Taiwan disregarding its stern warnings will have a "severe impact" on bilateral ties and it "gravely undermines" regional peace and stability, as the official media here said that the military will launch a series of "targeted" operations to counter her trip.

Pelosi landed in Taipei Tuesday night, according to the television footage shown by US networks. She is the highest-ranking US official to visit Taiwan in 25 years.

After Pelosi arrived in Taiwan, China's Ministry of Foreign Affairs issued a strong statement, saying that her visit is a "serious violation of the one-China principle and the provisions of the three China-US joint communiques".

"It has a severe impact on the political foundation of China-US relations, and seriously infringes upon China's sovereignty and territorial integrity. It gravely undermines peace and stability across the Taiwan Strait, and sends a seriously wrong signal to the separatist forces for 'Taiwan independence'. China firmly opposes and sternly condemns this, and has made serious demarche and strong protest to the United States," it said.

There is but one-China in the world, Taiwan is an inalienable part of China's territory, and the Government of the People's Republic of China is the sole legal government representing the whole of China, the statement said.

This has been clearly recognised by United Nations General Assembly Resolution and 181 countries have established diplomatic relations with China on the basis of the one-China principle, it said.

"The one-China principle is a universal consensus of the international community and a basic norm in international relations," it said.

Dismissing US Secretary Antony Blinken's assertion that US Congress functioned independently from the government, the statement said the US "Congress, as a part of the US Government, is inherently obliged to strictly observe the one-China policy of the US Government and refrain from having any official exchanges with China's Taiwan region".

"China is all along opposed to the visit to Taiwan by US congressional members, and the US executive branch has the responsibility to stop such visit," it said.

"Since Speaker Pelosi is the incumbent leader of the US Congress, her visit to and activities in Taiwan, in whatever form and for whatever reason, is a major political provocation to upgrade US official exchanges with Taiwan. China absolutely does not accept this, and the Chinese people absolutely reject this," it said.

Postings in the Chinese social media Weibo, akin to Twitter, showed footage of armoured vehicles on the move in the southern Chinese city of Xiamen - a port city on China's southeast coast facing Taiwan.

Another tweet by China Daily said the People's Liberation Army's Eastern Theatre Command said its forces are on high alert and will "engage the enemy on orders".

Beijing routinely protests any foreign dignitaries' visits to Taiwan, which claims its own and firmly insists all countries follow the One China policy acknowledging that the breakaway province is part of its mainland.

Arriving by the US Air Force plane, Pelosi and her delegation was received at the tarmac of the Taipei airport by Taiwan's Foreign Minister Joseph Wu.

She flew from Malaysia as militaries of China, Taiwan and the US went on full alert amid high voltage rhetoric from Beijing objecting to her visit, saying that it is violation of its sovereignty as Taiwan belongs to it.

Pelosi was expected to meet Taiwanese President Tsi-Ing-wen, whom China accuses as separatist, on Wednesday and spend the day touring the island including some of the industrial units. PTI