The accused have been directed to be present before the court on October 15. 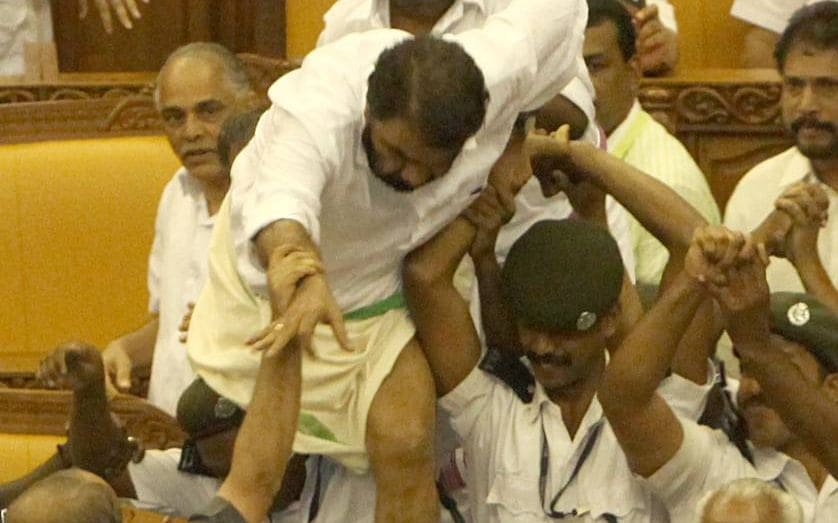 A visual of the ruckus in the Assembly in 2015 | Photo: Mathrubhumi

Thiruvananthapuram: The court rejected the petition seeking to withdraw the case against Left MLAs for creating a ruckus inside the Assembly during budget presentation in 2015.

The petition filed by the government was rejected by the Thiruvananthapuram Chief Judicial Magistrate Court. The accused have been directed to be present before the court on October 15. The court refused to withdraw the case as the accused were booked for offences including damaging public property.

The public watched the ruckus inside the Assembly on TV. If no legal action is taken against the accused, the public will lose faith in the law, the petitioners argued.

In 2015, the Left Democratic Front organised protests inside and outside the Assembly to prevent former finance minister K. M. Mani from presenting the budget. The LDF alleged that Mani had accepted Rs 1 crore as bribe to open closed bars.

During the protest, Opposition MLAs barged into the Speaker’s dais and destroyed computers and chairs. There are six accused in the case including Minister for Industries E. P. Jayarajan and Higher Education Minister K. T. Jaleel. K. Ajith, K Kunjahammad, C. K. Sadasivan and V. Sivankutty are the other accused.

The government moved the court based on a letter filed by V. Sivankutty. Several others, including Opposition leader Ramesh Chennithala, had filed petitions against the withdrawal of the case.