'Mr Speaker, isn't this the first recorded case of the sinking ship deserting the rat?' Parliamentary wit or unparliamentary language fit to be expunged? 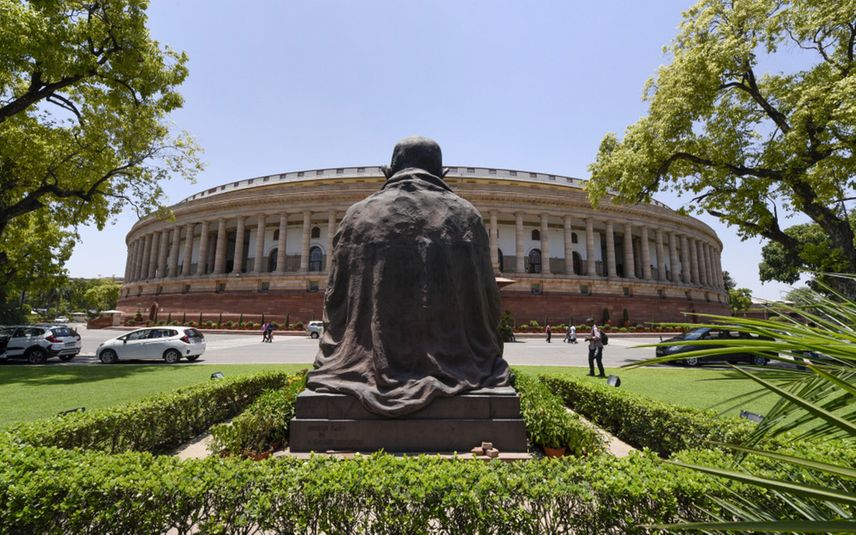 A view of Parliament House in New Delhi | PTI

The recent controversy over 'unparliamentary expressions' has left many parliamentarians bemused. Some terms are declared 'unparliamentary' from time to time by the Chairs of various legislative bodies of our country as well as in Commonwealth Parliaments, usually following a heated exchange. The Lok Sabha Secretariat has a habit of compiling these, ostensibly for ready reference in the future, and issuing them routinely. Most of the time no one pays much attention to the list. But as a 'word maven' myself, I often enjoy going through them and usually find myself laughing at the innocuous terms that have fallen afoul of some Speaker or chair somewhere. But I have never taken the list seriously, until a number of my colleagues protested that this year's list was nothing short of a 'gag order' on their freedom of expression.

The offending compilation lists words and expressions declared unparliamentary in the Lok Sabha, Rajya Sabha and state legislatures in India during 2021, besides those disallowed in some of the Commonwealth Parliaments in 2020. The list of expressions also includes any aspersions made against the Chair in both of our houses of parliament in either English or Hindi, which have been ruled to be unparliamentary and expunged from the records of Parliament. The way this works is that MPs or the government object to some words used against them by other MPs, the Rajya Sabha Chairman or Lok Sabha Speaker vets the words spoken in the House during the session, and words or terms deemed 'unparliamentary' are expunged by the Chair. The action is retrospective and takes place after the words have actually been spoken.

The list that created such controversy is a compilation of all such recent instances the Lok Sabha Secretariat could find. In fact the document correctly states that some of the keywords may not appear unparliamentary unless read in conjunction with the other expressions spoken during the parliamentary proceedings. In any case, the fact that an expression may have been considered unparliamentary in one place at one time in one context does not mean it is perpetually banned; in our Parliament, the Rajya Sabha Chairman and the Lok Sabha Speaker still have the last word in expunging words and expressions.

The controversy was no doubt sparked by the presence of some totally innocuous words in the list, found out of order in the past for reasons no longer retrievable. Among some of the English and Hindi words listed by the Secretariat as unparliamentary include 'ashamed', 'abused', 'bloodshed', 'bloody', 'betrayed', 'cheated, 'chamcha', 'chamchagiri', 'chelas', 'childishness', 'corrupt', 'coward', 'criminal' and 'crocodile tears'. Routine English words like 'disgrace', 'donkey', 'drama', 'eyewash', 'fudge', 'hooliganism', 'hypocrisy', 'incompetent', 'mislead', 'lie', 'untrue' and even 'sexual harassment' also find a place on the list. If they were to be prohibited for use in Parliament henceforth, it would make debates impossible to conduct.
The Hindi words listed as unparliamentary include 'gaddar', 'girgit', 'goons', 'ghadiyali ansu', 'apmaan', 'asatya', 'ahankaar', 'kala din', 'kala bazaari', 'khareed farokht', 'danga', 'dalal', 'daadagiri', 'dohra charitra', 'bechara', 'bobcut', 'lollypop', 'vishwasghat', 'samvedanheen', 'pitthu', and 'behri sarkar', none of which would be considered unfit for utterance by the average college student in northern India.

A quick look at some of the explanations provided indicates that 'abused' was considered unparliamentary in Australia's House of Representatives, 'childishness' was expunged in Quebec's National Assembly, and 'lollipops in the budget' was deleted from the records of the Punjab Assembly. In Hindi, 'Ant-Shant' (rubbish) and 'aksham' (incapable) were expunged from the records of the Chhattisgarh Assembly, 'anpadh' (illiterate), 'anargal' (unrestrained) were expunged from the Rajasthan Assembly. The context of these decisions and the manner of their usage is not provided,
One of my colleagues has defiantly said he would use all the words on the list and challenge the chair to expunge them. But the fact is that the list is just a compilation of words that have been deemed unparliamentary by various presiding officers in the last couple of years. It is not an instruction but an indication. Some are regular words which feature in parliamentary debates all the time and it is possible they were expunged in a specific context that would not apply in other contexts. Expunging always takes place after the unparliamentary words have been spoken and not in anticipation. So no one need feel gagged.

In any case a ruling by one presiding officer is not necessarily binding on another. So I would treat this list as indicative rather than definitive. I would urge my fellow MPs to speak normally and see whether the list is applied in a draconian manner to stifle meaningful criticism. As always, implementation is the key, not the list itself; what will matter is how it is applied in practice, and indeed whether it is applied at all.

The 'Mother of Parliaments' is of course most famous for the subtle use of parliamentary invective. Sometimes you can be sure that a Lok Sabha Speaker would find an expression used in Britain to be unparliamentary - for instance, when an MP was questioning a Minister and the Prime Minister walked into the House, the MP remarked, 'Ah, why question the monkey when the organ-grinder is here?' But others would be far more difficult to find out of order, such as a British Minister reacting to an attack on him with the comment 'it was like being savaged by a dead sheep'. What would you expunge there?

And from last week's British political drama over the resignation of Prime Minister Boris Johnson, a classic one-liner is being attributed to the Leader of the Opposition in the British Parliament, Sir Keir Starmer: 'Mr Speaker, isn't this the first recorded case of the sinking ship deserting the rat?' Parliamentary wit or unparliamentary language fit to be expunged? I am glad that an Indian presiding officer did not have to decide!

The recent controversy over 'unparliamentary ...