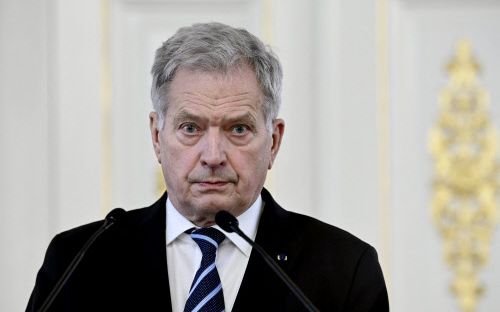 Helsinki: Finland’s leaders said Thursday they’re in favor of rapidly applying for NATO membership, paving the way for a historic expansion of the alliance that could deal a serious blow to Russia as its military struggles with its war in Ukraine.

The annoucement by President Sauli Niinisto and Prime Minister Sanna Marin means that Finland is all but certain to join the Western military alliance, though a few steps remain before the application process can begin. Neighboring Sweden is expected to decide on seeking NATO membership in coming days.

“Finland must apply for NATO membership without delay," they said. "We hope that the national steps still needed to make this decision will be taken rapidly within the next few days.”

Russia reacted to the development with a warning. The Russian Foreign Ministry said in a statement that Finland joining NATO would “inflict serious damage to Russian-Finnish relations as well as stability and security in Northern Europe."

“Russia will be forced to take retaliatory steps of military-technical and other characteristics in order to counter the emerging threats to its national security," the ministry said.

“History will determine why Finland needed to turn its territory into a bulwark of military face-off with Russia while losing independence in making its own decisions,” it added.

Finland has the longest border with Russia out of all the European Union’s 27 members.

Previously, the Kremlin had warned of “military and political repercussions” if Sweden and Finland decided to become a NATO member. Should they seek to join the alliance, there would be an interim period lasting from when the applications are submitted until ratification by lawmakers in all 30 existing member nations.

In NATO member Estonia, which also borders Russia, Prime Minister Kaja Kallas tweeted that “history being made by our northern neighbors.” She pledged to support “a rapid accession process” for Finland into NATO.

The U.K. pledged Wednesday to come to the aid of Sweden and Finland if the two Nordic nations came under attack.

During a joint news conference with Johnson in Helsinki this week, Niinisto said Moscow could only blame itself should his nation of 5.5 million people become a NATO member.

“You (Russia) caused this. Look in the mirror,” the Finnish head of state said Wednesday.

On Thursday, Niinisto tweeted that he spoke with Ukrainian President Volodymyr Zelenskyy about Finland's firm support for Ukraine and the country's intention to join NATO. Niinisto said Zelenskyy “expressed his full support for it."

In 2017, Sweden and Finland joined the British-led Joint Expeditionary Force, which is designed to be more flexible and respond more quickly than the larger NATO alliance. The force uses NATO standards and doctrine so it can operate in conjunction with the alliance, the United Nations or other multinational coalitions.

Fully operational since 2018, the force has held a number of exercises both independently and in cooperation with NATO.

Russia’s aggression in Ukraine prompted Finland and Sweden to reconsider their traditions of military nonalignment and to contemplate joining NATO itself. Public opinion in the two countries quickly started to shift toward favoring membership, first in Finland and a bit later in Sweden, after Russia invaded Ukraine on Feb. 24.

The latest opinion poll conducted by Finnish public broadcaster YLE showed earlier this week that 76% of Finns are in favor of joining NATO, a big change from earlier years when only 20-30% of respondents favored such military alignment.

Speaking to European Union lawmakers Thursday as Niinisto and Marin made their announcement, Finnish Foreign Minister Pekka Haavisto said that Russia’s unpredictable behavior was a serious concern for Finland. He cited Moscow’s readiness to wage “high-risk operations” that could lead to many casualties, including among Russians.

Should Finland become a NATO member, it would represent the biggest change in the Nordic country's defense and security policy since World War II, when it fought against the Soviet Union.

During the Cold War, Finland stayed away from NATO to avoid provoking the Soviet Union, instead opting to remain a neutral buffer between the East and the West while maintaining good relations with Moscow and also with the United States.

NATO Secretary-General Jens Stoltenberg has said the military alliance would welcome Finland and Sweden — both of which have strong, modern militaries — with open arms and that he expects the accession process to be speedy and smooth.

NATO officials say the Nordic duo's accession process could be done “in a couple of weeks.” The most time consuming part of the procedure – ratification of the country’s protocol by the existing NATO members – could be completed in less time than the four or so months it took West Germany, Turkey and Greece to join in the 1950s, when there were only 12 members to ratify their applications.

“These are not normal times,” one NATO official said this week, discussing the possible applications of Finland and Sweden. The official was briefing reporters about the accession process on condition that he not be named as no application has been made by the two countries.