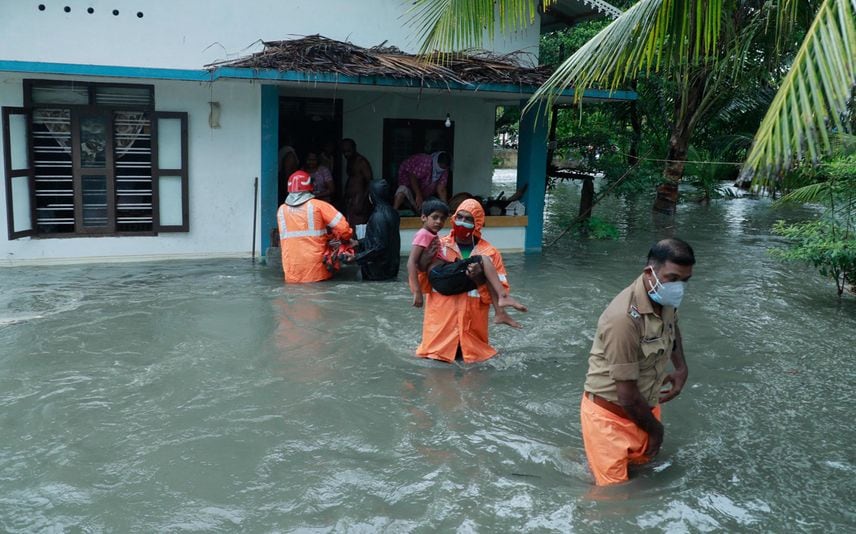 Thiruvananthapuram: In view of the incessant rains across the state, a disaster management team will be deployed in waterlogged regions in Kochi. People in these regions will be evacuated with the help of this team. Meanwhile, ten shutters of the Bhoothathankettu dam were opened. Eight shutters were raised one meter in height and two shutters by 50 centimeters. Kottayam continues to receive heavy rainfall and the water level in Manimala and Meenachil rivers is rising.

The India Meteorological Department (IMD) has forecasted that isolated regions in all districts will receive heavy rainfalls in the coming hours. IMD has also predicted heavy rainfalls in the state for the next five days due to the cyclonic circulation and trough formed over Kerala and other neighbouring regions.

As per the alert, isolated places across the state will receive heavy rains accompanied by thunder and gale. It has been raining continuously in northern and central Kerala since morning. Several regions across the districts have started flooding. Kochi is experiencing flooding in several areas including MG road, Kaloor and South railway station road. Shops near the Edappally toll junction were flooded in the rains. Several people living in Thrippunithura had to be evacuated following the flooding.

The falling of a tree on Koyilandy in Kozhikode disrupted traffic on the national highway. In Idukki, a tree fell onto the house of Kombayar native Suresh. The residents of the house escaped without injuries.

It has been forecast that heavy rains will continue till May 22. Because there is cyclonic circulation over the northern region of Tamil Nadu and its nearby regions. While a north-south trough runs from Madhya Pradesh to Tamil Nadu.

As a result, the sea is also expected to get rough till May 21. Fishing in Kerala, Karnataka and Lakshadweep coast has been restricted till further notice.