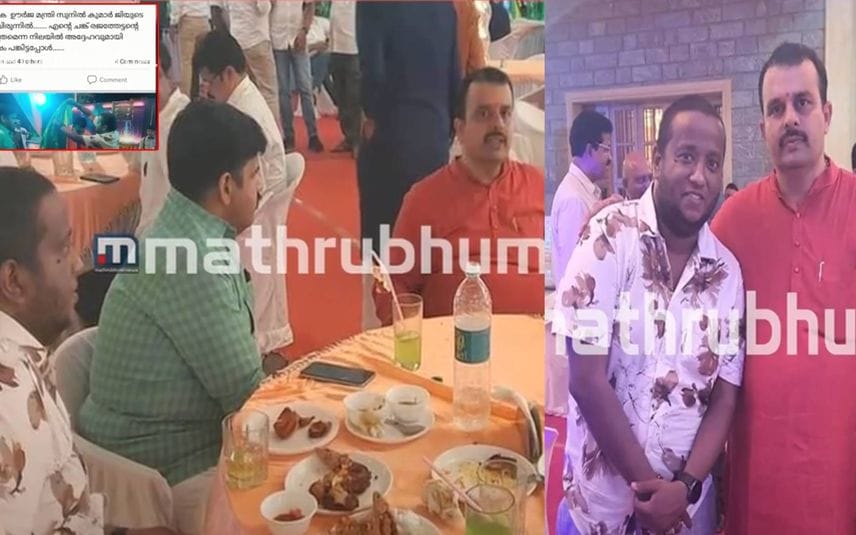 Thiruvananthapuram: Old photos of Shaj Kiran, alleged middleman who has links to gold smuggling accused Swapna Suresh, attending a reception organised at Karnataka minister V Sunil Kumar's residence has surfaced triggering doubts over his links with the ruling party. Kerala BJP leader Sandeep Warrier, Shaj's 'close friend' Ranjith also attended the event along with him. The photos were shared on Facebook on September 24, 2021.

Shaj met BJP leaders at the residence of Sunil Kumar, energy minister in Basavaraj Bommai's ministry. Shaj is seen felicitating Sunil Kumar. Sandeep is standing next to Shaj smiling. It is alleged that Shaj met the minister regarding an investment of Rs 100 crore. However, it is unclear what they discussed.

It may be recalled that Sunil Kumar was in-charge of the Kerala unit of BJP during the election time. The Kerala state committee came to know about the meeting when Sunil Kumar contacted them about the matter.

Denying the allegations, Sandeep said it was a coincidental meeting at the event.

It is learnt that district leadership of Wayanad and Thrissur have complained against Sandeep Warrier.

Swapna had alleged that Shaj, her former acquaintance, had threatened her to withdraw her statement against chief minister Pinarayi Vijayan. She also said Shaj is a middleman who manages the financial dealings of Pinarayi and CPM state secretary Kodiyeri Balakrishnan.