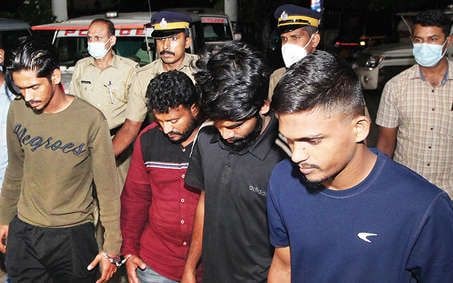 Accused arrested in the murder of RSS activist Sreenivasan

Palakkad: Two more accused were held in relation to the murder of RSS activist Sreenivasan in Palakkad. Police informed that the accused who are in custody were booked for alleged involvement in the conspiracy behind the murder. It has been hinted that the investigation team found the autorickshaw in which the weapons were brought and the other vehicles used by the assailants for the crime. However, the probe team did n't issue any official statements over the progress in the investigation.

Police had also arrested four Popular Front of India (PFI) activists on Thursday in connection with the same case. Investigation officers had informed that the accused Muhammad Bilal, A Riyasuddin, A Muhammad Rizwan and M Sahad are the office bearers of the PFI regional units.

PFI members met near mortuary on the night ...

Police stated that Muhammad Bilal and Riyasuddin were involved in the conspiracy and they were present at Melamuri when Sreenivasan was hacked to death. Muhammad Rizwan had collected mobile phones and entrusted to the houses of the assailants who were directly involved in the crime. Sahad was nabbed for the charges of conspiracy and helping the assailants in the crime. The four suspects, who were arrested on Thursday will be produced in the court on Friday evening.