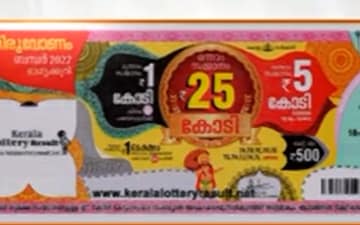 The first prize winner who hit the jackpot worth Rs 25 cr will get Rs 15.75 cr after deducting tax and other charges. The person who signs on the back side of the winning ticket will be identified as the winner.

Interestingly, the first prize winner purchased the lottery on Saturday, a day before the draw.

Ticket number TG 270912 won the second prize of Rs 5 cr. The second prize winning lottery was sold by Meenakshi Lottery Agency in Kottayam. Pappan, a native of Pala had sold the ticket.

The third prize of Rs 1 crore each will be given to 10 persons.

The numbers of the third prize-winning lotteries are as follows:

The fourth prize of Rs 1 lakh will be given to tickets belonging to the 41917 series.

The fourth prize of Rs 1 lakh each will be given to 90 persons.

Likewise, the fifth prize of Rs 5,000 each will be distributed to the winners.

It is for the first time, Onam bumper offers the highest prize money. Last year, the first prize for the ticket was Rs 12 cr. But this time, Rs 25 cr will be given to the first prize winner. The ticket rate has been increased from Rs 300 to Rs 500.

The Onam bumper was priced at Rs 500. The department will give a commission of Rs 95 to small agents and Rs 99.69 to wholesale agents who sell more than 1000 tickets.
Till date, the government has raised Rs 270 cr through the ticket sale.