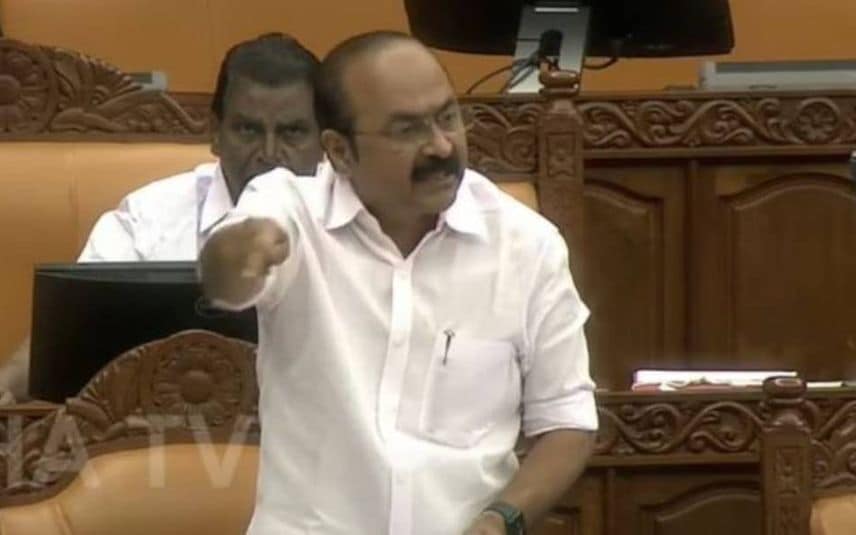 VD Satheesan during his speech at Assembly / Photo: Screengrab of Sabha TV

Thiruvananthapuram: Kerala assembly speaker AN Shamseer was forced to suspend the proceedings for the day and adjourned the House as the special session witnessed a war of words between the ruling faction and the Opposition on Friday.

The speaker had a tough time controlling the session as UDF and LDF members raised scathing remarks against each other while discussing Meppadi violence and drug menace in the state.

Opposition leader VD Satheesan and Excise Minster MB Rajesh locked horns first, while debates escalated as others in the camps joined the party.Linto Joseph and Sachin Dev of the ruling faction criticised Satheesan’s remarks, following which Opposition members including T Siddique came up with heated arguments.

Satheesan claimed that the accused in the Meppadi violence which left SFI leader Aparna Gowri injured were the accused in another incident that happened three months ago.

“Those involved in the case related to the uprooting of SFI flag pole are behind Meppadi violence. A drug racket has been functioning at the Meppadi campus which obstructs the functioning of student parties. Some old students are behind it. There is no need to frame KSU members in the violence as SFI tasted defeat in the elections,” he said.

Satheesan targeted the government over the alleged retaliation of SFI activists on KSU members over the Meppadi violence. He also mentioned the suspension of the SFI unit secretary in Meppadi campus over drug abuse.

When the Congress-led UDF members also stood up from their seats and raised their voices, the House witnessed noisy scenes for some minutes.

Later, Speaker A N Shamseer declared the House as adjourned for the day after cutting short other scheduled businesses.

Earlier, Mathew Kuzhalnadan (Congress) raised the drug menace issue citing some recent incidents during zero hour and demanded a discussion after putting on hold other businesses. Among various incidents, he pointed to the recent startling revelation by a high school girl that she was allegedly trapped by the drug mafia by giving biscuits laced with an addictive substance and later forced to become a carrier of contrabands in Azhiyoor in Kozhikode.

In his reply, the Local Self-Government Department (LSGD) Minister M B Rajesh admitted that the issues mentioned in the notice for the adjournment motion were serious.

However, he rejected the charges that drug consumption is widespread in the southern state. Quoting figures, the Minister said Kerala was not among the top five drug consuming states in the country.

Rajesh also assured the House that the drug mafia would be rooted out in the state and the government has already begun stringent measures in this regard.

He criticised the opposition for allegedly giving a political colour to the serious issue.

The Speaker rejected leave for the motion based on the reply of the minister.