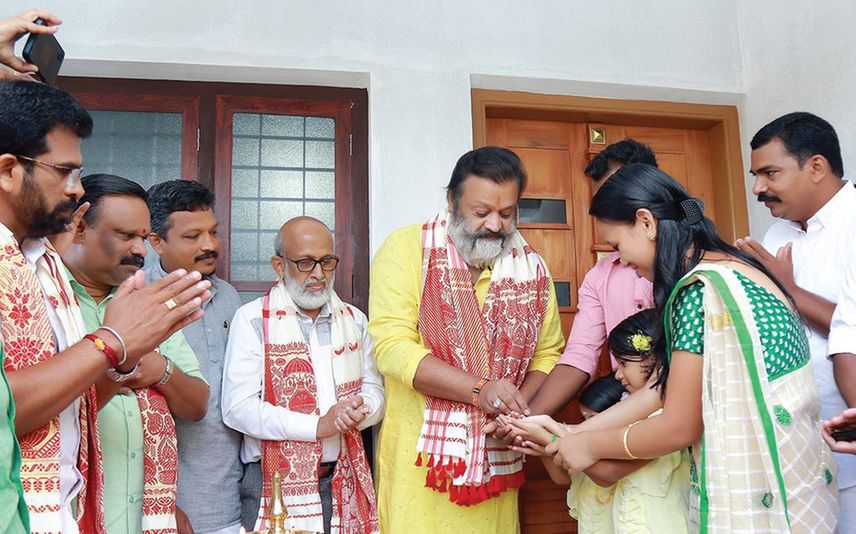 Lamp being lit by Suresh Gopi on Wednesday as Assam native Munmi Gogoi and her family moved into the new house named ‘Sreelakshmi’ | Photo: Mathrubhumi

Iritty: Actor Suresh Gopi MP fulfilled the promise of a new home for Kerala’s daughter-in-law from Assam, Munmi Gogoi. The lamp was lit by Suresh Gopi at around 7.30 am on Wednesday and the family moved into the new house named ‘Sreelakshmi’. Dr P Saleem donated land to build the house.

Munmi, a native of Assam, had contested as the NDA candidate at ward no. 11 Vikas Nagar of Iritty Municipality. Actor-turned-politician Suresh Gopi noticed the article on Munmi that was published in Mathrubhumi daily and offered to build a house for her.

Munmi, her husband Iritty native K N Sajesh and their two daughters were living in a one-room rented house in Oovappally. Suresh had called up Munmi and promised a house. The couple moved here 8 years back.

Munmi’s candidature attracted much attention as an Assam native was contesting to Iritty municipality. She won the hearts of people with her natural charm and expertise in Malayalam. Munmi speaks fluent Malayalam which surprised the actor when she thanked him in the language.

The house construction progressed even during the time of Covid. Initially, it was decided that Suresh Gopi and family would arrive on April 16, the day after Vishu, for the house warming ceremony. But he couldn’t make it. He then informed the family that he would arrive on Wednesday. He spent almost an hour at the new house with the family and returned after having meals with them.