In a video, which was widely circulated on social media, the AAP MLA was in the midst of a heated argument with a group of party workers. After which he was manhandled and hounded out of the office. 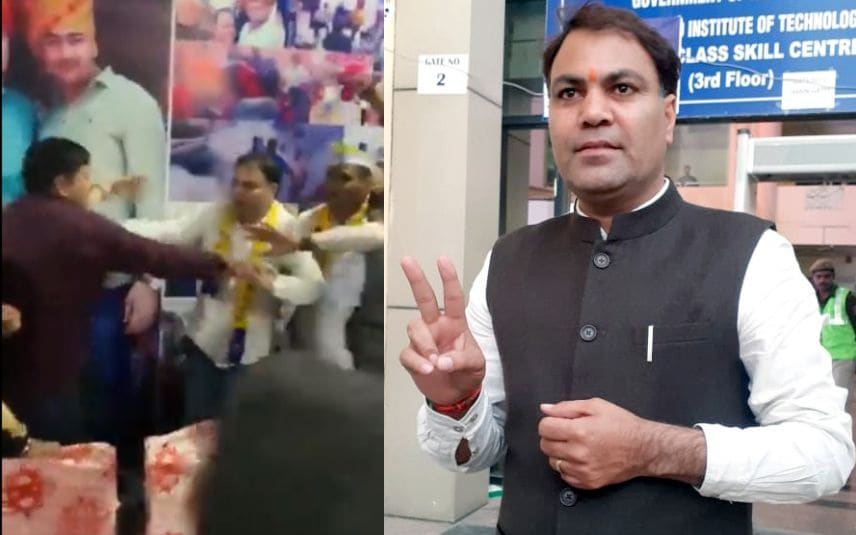 The purported video of the said incident was shared by several BJP leaders on their social media handles.

In a video, which was widely circulated on social media, the AAP MLA was in the midst of a heated argument with a group of party workers. After which he was manhandled and hounded out of the office. He was later pursued by the attackers and took refuge inside the police station.

Delhi BJP while sharing the video on Twitter claimed that Yadav was thrashed by AAP workers on the charge of selling tickets.

"AAP MLA was beaten up! Aam Aadmi Party MLA Gulab Singh Yadav was thrashed by AAP workers on the charge of selling tickets. Kejriwal ji, this is how the turn of all the corrupt MLAs of AAP will come," Delhi BJP tweeted in Hindi.

BJP spokesperson Sambit Patra also took a dig and said AAP's corruption is such that even their members are not sparing their MLAs.

"Unprecedented scenes from the party that indulged in the theatrical drama of 'honest politics'. Such is AAP's corruption that even their members are not sparing their MLAs! A similar outcome awaits them in upcoming MCD polls," he said.

"In the last 8 years, along with the people of Delhi, they did not back down from deceiving their workers as well. MLA from Matiala was thrashed by AAP workers for selling tickets! This is a government of thugs, which does not spare even its workers, then how will it spare the common people," said Gupta.

Meanwhile, AAP MLA from the Matiala assembly constituency refuted the claim made by the BJP and insinuated that the attack was arranged by area BJP leaders.

"The BJP has gone berserk. It is making baseless allegations of selling tickets. I am at Chhawla police station now. I have seen the BJP's corporator and BJP's candidate from this ward present in the police station to save those people (attackers). What can be a bigger proof than this? The media is present here, must ask the BJP," Gulab Singh Yadav said in a tweet in Hindi.

"AAP office broken by AAP Muslim supporters in Sri Ram Colony Delhi," he tweeted along with the video.

Addressing a press conference in the national capital, the BJP leader alleged that AAP leader Bindu Shriram was told to pay Rs 80 lakh for getting a ticket to contest the December 4 polls to the MCD.

"AAP leader Bindu Shriram, who was hoping to contest ward no 54, Rohini-D, was asked to pay almost Rs 80 lakh for a ticket by party officials concerned with MCD polls. She told them that she will pay the amount in three instalments of Rs 21 lakh, Rs 40 lakhs, and Rs 21 lakhs. But she was asked to pay the whole amount at once," he said.

He further alleged that the entire incident was recorded by the AAP leader.

"The money was supposed to go to Atishi, Gopal Rai, Durgesh Pathak, Saurabh Bharadwaj, and Adil Khan. Bindu recorded the entire incident where she was asked to pay the amount at one go," Patra claimed.

On October 14, the Anti-Corruption Bureau (ACB) in the national capital arrested three persons for allegedly accepting a bribe in exchange for a ticket for the MCD elections.

Notably, the incident took place weeks ahead of the MCD election, which is scheduled to take place on December 4 while the counting of votes will be done on December 7.

There are 250 valid candidates each from BJP and Aam Aadmi Party (AAP). As per information, three nominations of Congress were cancelled in MCD elections, Congress will contest only on 247 seats.

The polls to the Municipal Corporation of Delhi on December 4 are shaping up to be a two-way contest between the BJP, which currently holds the civic reins in the national capital, and the AAP, which is in power in the state.

Notably, the BJP has governed the civic bodies since 2007.

In the last civic body polls in 2017, the BJP won 181 of the 270 wards. The AAP had won 48 wards, while the Congress managed to win 27. Polling was not held for two seats due to the death of candidates.

Earlier, the total number of civic wards in the national capital was reduced from 272 to 250 following a notification issued by the Ministry of Home Affairs.