Many scientists believe that there are living civilizations out there in the distant frontiers of Space. 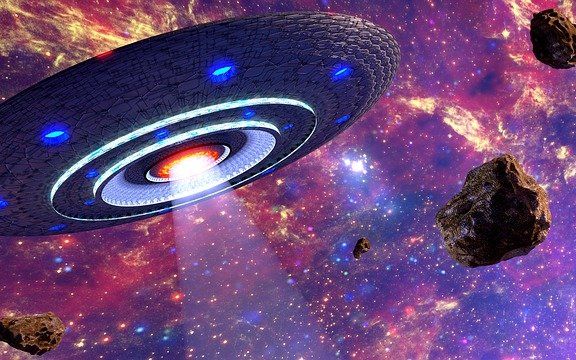 Different religions have emerged at various points of time in several locations on the globe, seeking an answer for the meaning of life, mystery of death and to know the identity of the creator of this Universe. None have ever deciphered any of these; mankind continues to be as ignorant as his distant ancestors, on all these enigmas. Despite 800,000 years of existence of mankind on this Planet, nobody has been able to shed light on these questions that have continued to engage the thoughts of philosophers, priests and scientists alike. All that has been conjured up are crazy fantasies about some abstract Heaven and Hell, unproven beliefs in rebirth, reincarnation and transmigration of souls. In the entire process, we have also self-glorified and self-certified ourselves as the best of God’s creations!

Fortunately, scientists are constantly hunting the distant galaxies and the vast super space to sniff out the presence of life of any kind. Many scientists believe that there are living civilizations out there in the distant frontiers of Space. Most NASA Astronauts also believe in the existence of alien life. We have the brazen effrontery to call them “Extra Terrestrials”, are they extra? That apart, the day we discover the existence of a cosmic brother or sister, everything will undergo a cataclysmic change forever. Our notions about death and religion will all be compelled to change dramatically. Scientists are confident that in the coming decade itself mankind will come in contact with some form of cosmic life. But, there are many, who believe that contact has already occurred and it is the fear of some governments to disclose the truth, fearing large-scale social and religious upheaval that is preventing the news from entering public domain.

The Rig Veda, the most ancient of any human document, has interesting light to shed on this subject. The term “Vimana” is very well known, and frequently mentioned in many Hindu scriptures. The approximate translation would mean a ‘flying machine’. Another common reference is to the existence of 14 parallel universes in the cosmos. But it is only in 2018, that Stephen Hawking came up with the idea of a multiverse theory — the idea that our universe, is just one of an infinite number of coexisting universes. There is no God, but life on other planets is not such an alien concept, Professor Hawking revealed. He said it was completely rational to assume there was intelligent life elsewhere; but if they visit, it may not turn out so well for us." The idea that we are alone in the universe seems to me completely implausible and arrogant," he said. "Considering the number of planets and stars that we know exist, it's extremely unlikely that we are the only form of evolved life”.

Hindu scriptures are replete with references to supernatural beings like Gandharvas, Yakshas, and many more, and their unique qualities included the ability to appear at will and disappear at will, deep knowledge about secrets of flying and the knowledge of other domains in the universe where life exists. The Interdimensional Hypothesis (IDH or IH) is a hypothesis advanced by ufologists such as Jacques Vallée, which states that unidentified flying objects (UFOs) and related events involve visitations from other "realities" or "dimensions" that coexist separately alongside our own. IDH also holds that UFOs are a modern manifestation of a phenomenon that has occurred throughout recorded human history, which in prior ages were misinterpreted as mythological or supernatural.

Astronomer Carl Sagan was of the opinion that the Milky Way houses a million societies. A more conservative claim is that the number is closer to 10,000. The famous formula, introduced by astronomer Frank Drake in 1961, propounds the existence of innumerable civilizations.

Aliens spying on us from across interstellar space is a classic trope of science fiction. No-one would have believed in the last years of the 19th century that this world was being watched keenly and closely by intelligences greater than man’s. But, the Hindu Puranas speak of 400,000 humanlike races of beings living on various planets and of 8,000,000 other life forms, including plants and lower animals. Out of the 400,000 humanlike forms, human beings are said to be among the least powerful.

The Mahabharata War was a catastrophic war that engulfed the whole world and describes use of highly destructive weapons that appear very similar to modern nuclear weapons. One of the highlights of this war is the participation of alien beings and a powerful spaceship called ‘Saubha’, mentioned in detail in the Drona Parva that caused great havoc on the Pandava forces. The destruction of this spaceship by Lord Krishna using the invincible Sudarshan Chakra, is the climax of the Mahabharata war. Surprisingly, after the close of the Mahabharata war, the visitations by aliens or extraterrestrials become totally absent. All we have are vague and sketchy descriptions of fast moving flying objects, unexplained alien encounters, and unverified eye witness accounts, till 1947.

One dramatic incident similar to that of the Saubha is the Roswell flying saucer crash mystery in New Mexico, USA. More than 75 years ago, arguably the world’s most notorious UFO mystery began after an "object" crashed near a ranch in the desert on the outskirts of Roswell, New Mexico. Despite countless alien investigators pouring over the "evidence" from the alleged UFO crash which reportedly included aliens, both alive and dead inside the wreckage, the riddle has never been solved. On July 7 1947 rancher W. W. Brazel told Sheriff George Wilcox he had found "something strange" on his sheep ranch on the outskirts of Roswell. The Sheriff alerted the nearby Army base air field. Major Jesse Marcel, an intelligence officer, was sent to investigate. Mr. Marcel was apparently convinced that the rancher had found the world’s first evidence of aliens and what they were looking at were the remains of a flying saucer. He, in turn, reported this up the chain, prompting duty press officer Walter Haut, at the now notorious Nevada Area 51 base, to send this out in a news release.

The following day’s edition of the local paper, the Roswell Daily Record, unsurprisingly had the dream headline: "RAAF CAPTURES FLYING SAUCER ON RANCH IN ROSWELL REGION”. But the day of the news report, the RAAF retracted its original release and said what was found were described as the parts of a downed weather balloon! Reports indicate that the US Army and Airforce personnel came to the site and carried away all the debris and remnants to an unknown destination, speculated to be Area 51 Military Base in Nevada. But by now the snowball had started, and it was gathering pace. No one was interested in the follow up story, and the original first went national and then global, even without the internet, and in Roswell, USA the world’s UFO capital was born.

US magazine Time did an investigation published on the Roswell Incident - as it became known - on the 50th anniversary in July 1997. It said Stanton Friedman, a former nuclear physicist-turned UFOlogist, was told in 1978 that a now retired Mr. Marcel had "once handled the wreckage of a UFO". Mr. Friedman reportedly met Mr. Marcel, who remained convinced the debris was a flying saucer. This sparked him to investigate the 31-year-old case, seeking out other witnesses from that time. His book - The Roswell Incident, co-written by Charles Berlitz and published in 1980 - saw the mystery revisited many times. It has remained one of the world’s biggest conspiracy theories and UFO cases.

On the alien-ufo-research.com website today under the special Roswell section, the website says: "Was there a government cover up of a UFO or aliens in the Roswell crash? What exactly went on at Area 51?

But, the U.S. government has kept the issue under wraps, despite demands from various groups to make public the facts and recoveries from the site. There is lots of speculation that top secrecy is being maintained, fearing massive religious and social upheaval across the world. The Paradigm Research Group, a campaign organization set up by Steve Bassett, the only registered lobbyist on the UFO issue in the US, has been calling for an end to an alleged "truth embargo" that he and other UFO enthusiasts believe was put in place by global governments to hide the truth about aliens visiting earth, from the public, since the infamous 1947 Roswell UFO incident in New Mexico.

The mysterious Area 51 military base in Nevada, is believed to be the location where UFO enthusiasts believe evidence of alien technology is hidden away. Billionaire Laurence Rockefeller initiated the “Rockefeller Initiative” to secure release of all previously classified UFO files. In 2007, Mrs. Clinton acknowledged that among the top freedom of information (FOI) requests her husband received as president were requests related to UFO and alien disclosure.

As many nations are facing the spectre of religious terrorism, world needs a rude jolt, that we are only one amongst the many, and not an exclusive creation. Even if no UFO crash-landed, let us fervently pray that a UFO be tracked, made contact with and new life forms discovered, so that humankind can explore new frontiers of knowledge and new dimensions of existence. Such an eye opening - and humbling - experience is just what the human race needs today if peace has to reign on Earth.