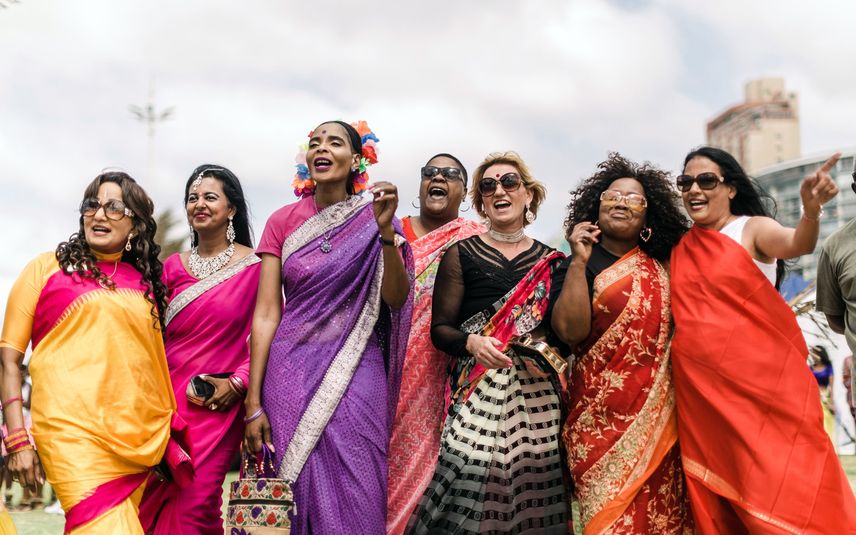 The mesmerizing feel and softness of Chiffon sarees has enthralled millions of ladies across the world. In the amazing galaxy of sarees, Chiffon sarees hold a unique place. The history of the Chiffon saree is linked with royalty, beauty, glamour and elegance. Chiffon is a lightweight plain-woven fabric with mesh like weave that gives it a transparent appearance. The word Chiffon is of French origin which means a cloth. It is made from cotton, silk or synthetic fibres like nylon, rayon and polyester. The fabric was made exclusively with Silk until Nylon was invented in 1938. With the introduction of Polyester fabric in 1958, the polyester chiffon blend became more popular because of its durability and economic viability. Bollywood cinema has long been an ardent patron of Chiffon.

The flowy Dupattas and the beautiful sarees and Salwar Kameez worn by actresses has been an integral part of Bollywood’s fashion for decades, and Chiffon material continues to hypnotize stars and fans alike.

India’s greatest royal fashion trendsetter, Maharani Indira Devi of Cooch Behar handpicked the Chiffon and took it to great heights of popularity. Her story is as enthralling as the flow of the Chiffon saree.

Maharani Indira Devi of Cooch Behar, was born in 1892 as Princess Indira Raje of Baroda, the only daughter of Maharaja Sayajirao Gaekwad III and Maharani Chimnabai. Her childhood days were spent at the fabulous Lakshmi Vilas Palace in Baroda and she was one of the first Indian Princess to obtain a western education. Though betrothed at a very young age to the Maharaja of Gwalior, one of the highest-ranking Princely States, Princess Indira Raje fell in love with Prince Jitendra Narayan of Cooch Behar, a small Princely State of North Bengal.

Cooch Behar Palace, also called the Victor Jubilee Palace, is a landmark in Cooch Behar city, West Bengal. It was modelled after Buckingham Palace in London and was built in 1887, during the reign of Maharaja Nripendra Narayan of Koch dynasty. It is currently a museum.

They accidentally met at the famous Delhi Durbar of 1911, and it was literally love at first sight for the beautiful young princess. Anticipating stiff opposition from her family, she controversially decided to break off the engagement with the Maharaja of Gwalior, herself, as he was anyway much senior in age to her and twice married. So, in an unconventional and unprecedented move, the eighteen-year-old princess wrote to the Maharaja herself saying she would not marry him. Her parents only heard of this when, with wedding preparations almost complete, the Maharaja Gaekwad received a telegram from Gwalior with the single sentence:

‘What does the princess mean by her letter?’

Predictably, her parents did not approve of her choice of the royalty of Cooch Behar, as the Bengali suitor belonged to a different caste and religious practice, and his family was considerably lower in the British Raj’s Order of Precedence. The princes of India and their states were strictly hierarchised by the British according to their wealth, size, history, and importance, and this precedence ruled everything in princely life, including, the place where they stood on the Viceroy’s carpet. The Gaekwads of Baroda ranked second in the Order of Precedence whereas the Maharaja of Cooch Behar, was placed at forty-sixth.

Seeing her adamant attitude, Indira was carted off to Europe and guarded closely, but despite such parental machinations, the couple remained unmoved. After two years of intense pressure, the couple were reluctantly allowed to marry, when it was feared that she might run away and cause even more humiliation. The Gaekwads reluctantly let their daughter marry the man she loved. However, none from her family attended the wedding.

Thus in August 1913, Indira Raje of Baroda became Indira Devi of Cooch Behar, the venue of her wedding being a small Registrar’s office in central London. In 1913, soon after their marriage, they became the Maharaja and Maharani of Cooch Behar, as, Jitendra’s brother died. However his tenure did not last long as Jitendra himself died within a decade due to his chronic alcohol addiction. The couple had five children, most famous of whom was Maharani Gayatri Devi of Jaipur.

Instead of settling down in Cooch Behar, Indira shifted to London. She refused to be like a typical Hindu widow, but wore only white coloured sarees. While on a trip to France, she first saw the chiffon fabric at Lyon, and instantly fell in love with it, and felt that it would be a wonderful saree material. So, an order was placed for a nine-yard white chiffon sari woven in Lyon. It became a great trendsetter, and Chiffon sarees became the craze of all ladies. To style up her sarees, she would add simple borders to her saree and pair it up with diamond shoes and a string of pearls. The Maharani popularised delicate chiffon sarees in combination with her gem-studded shoes made by Salvatore Ferragamo. All her sarees were custom made in a loom in France and she had a wardrobe filled with pastel chiffon sarees. Her look was incomplete without a pearl necklace around her neck. Her trademark attire became the white Chiffon saree, pearl necklace and gem-studded shoes, and this combination earned her the recognition as one of the ten most beautiful women in the world by fashion magazine Vogue.

But her social life in London was very colourful, and she lost large sums of money gambling in continental casinos and surprised everyone with a turtle, its back studded with gems, placed by her side always for good luck. Reports submitted to the imperial government noted with disapproval her patronage of the notorious 43 Club (with its drugs and other forms of decadence), and rumours of her romantic indiscretions caused even the English king to express disapproval. Her drinking habits, gambling and randy lifestyle, resulted in orders that she must return to India.

Back in India, Indira continued to lead a life of affairs and glamour. Despite her middle-age she was often described as one of the most beautiful Indian princesses to enthral Western society. Even in Cooch Behar she often threw sensational parties and continued to amaze and scandalize by her Bohemian ways.

Her daughter, the exquisitely glamourous Maharani Gayatri Devi also followed her mother’s footsteps and popularised the flowers chiffon sarees. Considered one of the most gorgeous queens, the Last Maharani of Jaipur, Maharani Gayatri Devi will be an unforgettable image in Indian royalty. Her impeccable style and elegance were remarkable. Born on May 23, 1919, in London, she grew up to become the third Maharani consort of Jaipur from 1940 to 1949, through her marriage to Maharaja Sawai Man Singh II. Following her husband's signature for the Jaipur State to become part of the Union of India and her step-son's assumption of the title in 1970, she became known as Maharani Gayatri Devi, Rajmata of Jaipur.

Gayatri entered the political arena by winning the Jaipur Lok Sabha seat in 1962. John F. Kennedy introduced her during an event as 'the woman with most staggering majority that anyone has ever earned in an election'. She tasted victory in the world's largest landslide poll win bagging 192,909 votes of 246,516 cast and the achievement was endorsed by the Guinness Book of Records.

Gayatri Devi contested as the candidate of the Swatantra party of C Rajagopalachari, the last and only Indian Governor-General of India. She continued to hold this seat in 1967 and 1971 running against the Congress Party. This enraged the then prime minister Indira Gandhi, who retaliated in 1971 by abolishing the Privy Purses, and stopping all royal privileges, and breaking the treaties agreed upon in 1947. Later, Gayatri Devi was accused of breaking tax laws, and served 5 months in Tihar Jail in Delhi during the Emergency. She retired from politics after that experience.

She had a deep, never-ending love for Chiffon, and in one of her interviews, she gave credit for this to her mother who started the craze for Chiffon saris.