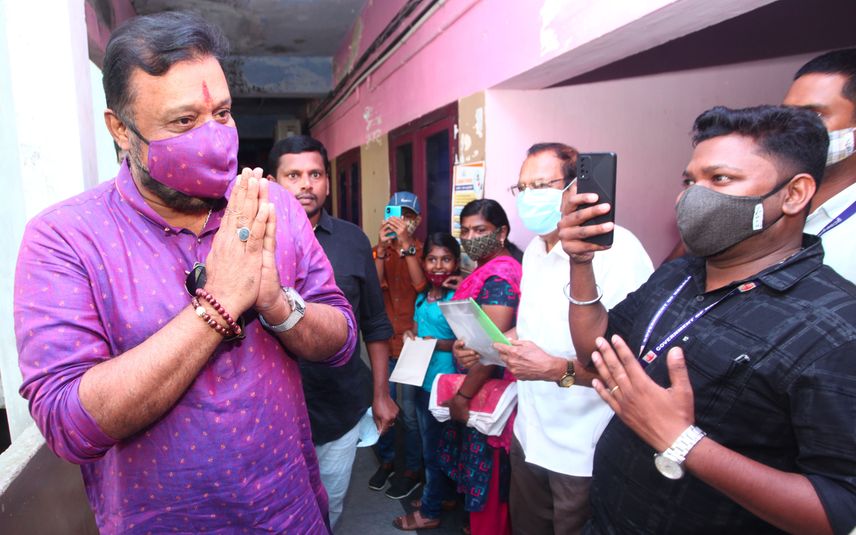 Thrissur: Malayalam actor and BJP MP Suresh Gopi's Vishukaineetam distribution here triggered a controversy after head priests received money from him. He has been offering 'vishukkaineetam' to individuals in parts of Thrissur.

From party workers of BJP in Chalakkudy unit to head priests in Thrissur Vadakkunnathan Temple, the actor-turned-politician has been giving Rs 1 as part of Vishu festival tradition since last week. However, his 'vishukaineetam' to head priests at some temples under Cochin Devasom Board has now garnered political colours and erupted a controversy.

After offering 'dakshina' to the temple head priests, Suresh Gopi had given a bundle of Rs 1 notes worth Rs 1,000 to the head priest at Vadakkumnathan temple. He handed over the money as 'vishukkaineetam' fund and assigned them to distribute it. Reportedly, the actor requested the priests to avoid giving Vishukkaineetam to kids. Cochin Devaswom Board has intervened in the matter and restricted the priests from receiving the money.

Without naming the actor, the Board in a media release said that some people are handing over money to the temple priests. The priests are not permitted to accept such offerings. The Board is of the stance that giving 'vishukkaineetam' fund to head priests is a way of misusing temples. It is learnt that the Board intervened in the wake of a hint that the actor may continue his Vishukaineetam distribution in other temples too.

According to the CPI leader and MLA of the constituency P Balachandran, Suresh Gopi has been distributing 'vishukaineetam' for getting political mileage. He added that he believes the public will be able to discern the motive in which temples and festivals are being targeted for cash in votes.
Pertinently, the actor’s term at Rajya Sabha will end by next Sunday and the apparent move is to improve his base in the district.

Reportedly, he has withdrawn Rs 1 lakh for the 'vishukkaineetam' drive.