The conflict started when the police tried to remove the activists from the place. Following this, the police used water cannon. The party workers pelted stones and sticks at the police. 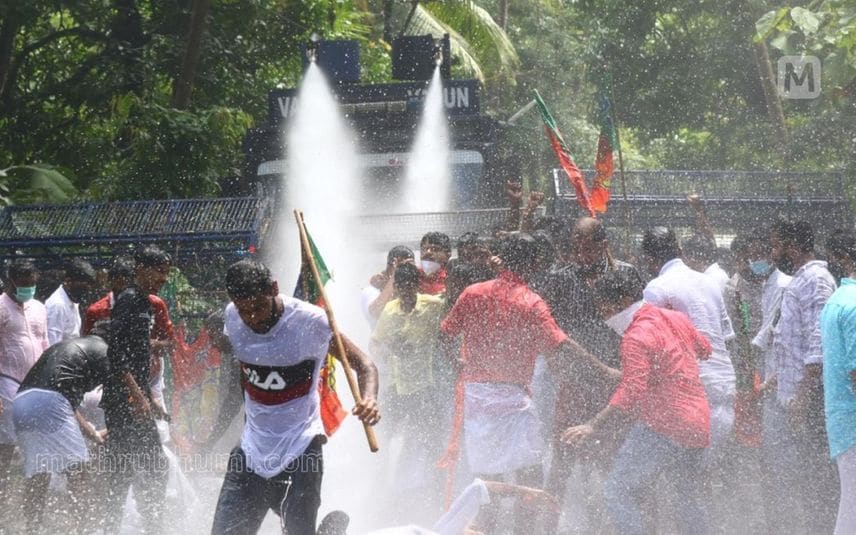 Thiruvananthapuram: The protest by various Opposition organisations demanding the resignation of ministers K T Jaleel and E P Jayarajan ended up in clashes at many places across the state.

The protest march by Youth Congress and Yuva Morcha resulted in violence at Thiruvananthapuram, Kozhikode and Palakkad. Police resorted to lathi charge in many places. MLAs Shafi Parambil and Sabarinathan were arrested.

During the protest march by Youth Congress and Yuva Morcha in Thiruvananthapuram, many party workers were injured in the lathi charge. The conflict started when the police tried to remove the activists from the spot. Following this, the police used water cannon. The party workers pelted stones and sticks at the police.

MLAs Shafi Parambil and Sabarinathan led the protests. The activists staged a sit-in protest on the road alleging that the police resorted to lathi charge and tear gas without any provocation and that the injured were not allowed to be hospitalised. Following this, the police arrested a group of Youth Congress workers.

Police resorted to lathi charge against the KSU march held in Kozhikode. Some of the activists are reportedly injured. Protesters engaged in a fight with police when the officials tried to arrest them. Then the police used water cannon.

The protest march by Yuva Morcha in Palakkad also ended up in clashes. The protesters engaged in a brawl with the police when the officials attempted to arrest them. Police then resorted to lathi charge. Police used water cannon on the Yuva Morcha workers when they organised a march to the residence of minister E P Jayarajan in Kannur.

There are reports that Yuva Morcha workers and DYFI workers engaged in a fight at Pappinisseri. KSU workers took out a protest march to Kannur collectorate. Police blocked the protest march by ABVP activists in Kochi demanding the resignation of Jaleel. The activists then staged a sit-in protest at the spot.