This is not a personal issue. The governor, who is supposed to function as per the elected government’s directions, is acting on his own accord. This is a policy issue,” said Yechury 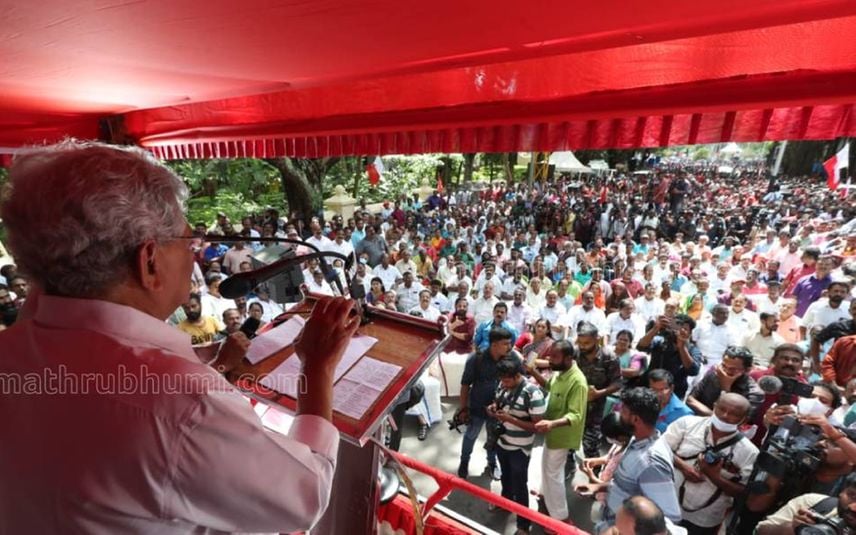 Thiruvananthapuram: The office of the Governor was "being pitted against the governments" in non-BJP ruled states in matters involving universities in order to implement BJP-RSS agenda of converting India into a "fascistic Hindutva rashtra" by controlling education and consciousness of the youth, CPI(M) general secretary Sitaram Yechury said on Tuesday.

Speaking at a protest organised at the Raj Bhavan here against recent actions of Governor Arif Mohammed Khan, who is presently in the national capital, Yechury said the office of the Governor "has been reduced to advancing the political objective of the central government and the ruling BJP".

"This a peculiar and unhealthy situation for Indian democracy," Yechury said at the protest outside the Raj Bhavan, where thousands had turned up, but was not attended by Chief Minister Pinarayi Vijayan or other ministers of his cabinet.

The CPI(M) general secretary said "this kind of conflict situation was not only happening in Kerala", but in all other non-BJP ruled states.

The agitation began in the morning with marches by thousands of Left supporters from various parts of the state capital to the Raj Bhavan, the office-cum-residence of the Governor, where Yechury inaugurated the protest.

"This matter of controlling education is an important aspect of the BJP-RSS' political design to convert this secular democratic India into a fascistic Hindutva rashtra of their liking and for that they require to control education and the consciousness of our youth."

"They do not want creativity. They want people to think in a backward obscurantist manner, victims of superstition and blind faith, so that their project of a Fascistic Hindutva rashtra can succeed. Kerala's higher education is the obstacle to it and so that is why they are attacking it.

"The role of the Governor as a Constitutional position is now being reduced all over as an office that is advancing the political objective of the central government and the ruling BJP.

He said the Governor and the Centre are arguing, "and unfortunately one or two judicial pronouncements support that", that the state laws must be in consonance or in accordance with the UGC guidelines.

"Some courts have opined that UGC guidelines are supreme. So this has to be properly reviewed and I think all non-BJP governments must seriously together consider moving the Supreme Court saying that you cannot encroach on the rights of the states and state assemblies to decide matters connected with universities in the states," he said.

The LDF organised the march to the Raj Bhavan here in protest against Kerala Governor Arif Mohammed Khan's actions regarding universities and bills passed by the state legislature.

The agitation is organised under the aegis of an education protection forum which would hold protests in all district centres too, the CPI(M) had said in a statement.

Both the Congress and BJP have opposed the protest march. PTI