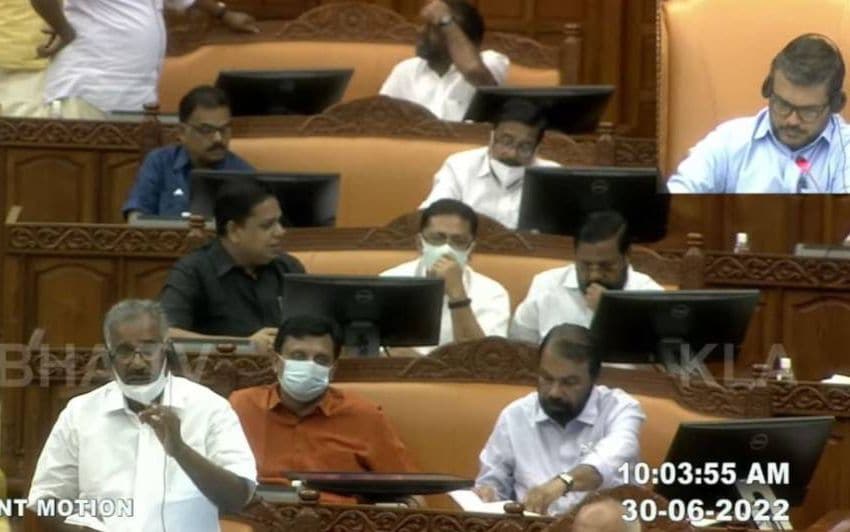 Thiruvananthapuram: The opposition on Thursday staged a walk out in the Assembly after the speaker refused to allow its adjournment motion on the buffer zone issue.

Forest minister AK Saseendran slammed the previous UDF government while replying to the motion of Peravoor MLA Sunny Joseph. It was the UDF government that agreed to have an eco-sensitive zone of 0 to 12 km surrounding the protected forests, he said.

While, Pinarayi government asked the union government to completely avoid human habitations and set the buffer zone from 0-1 km. The SC verdict has serious repercussions in Kerala. The government will do everything possible on the matter to protect the interests of the people, Saseendran said.

Minister also sought the cooperation of the opposition in fighting the matter with the union government. Parliament members should present the state's needs unitedly. The chief minister has called for a meeting of the officials on Thursday to discuss the matter, he added. The meeting will review the progress of the committee that was constituted to study the impact of the SC order. The report will be submitted to the union government and the supreme court in three months, the minister said.

Opposition leader VD Satheesan, in the press conference held after the walk out, slammed the state government and said the forest and law departments are not keen in solving the issue. The Kerala government's decision to have a buffer zone up to 1 km led to the SC verdict, he said.

Earlier, CPM had slammed the UPA government and the then union minister Jairam Ramesh for recommending a 10 km buffer zone surrounding the protected forests. However, Satheesan said Congress never had such a policy.