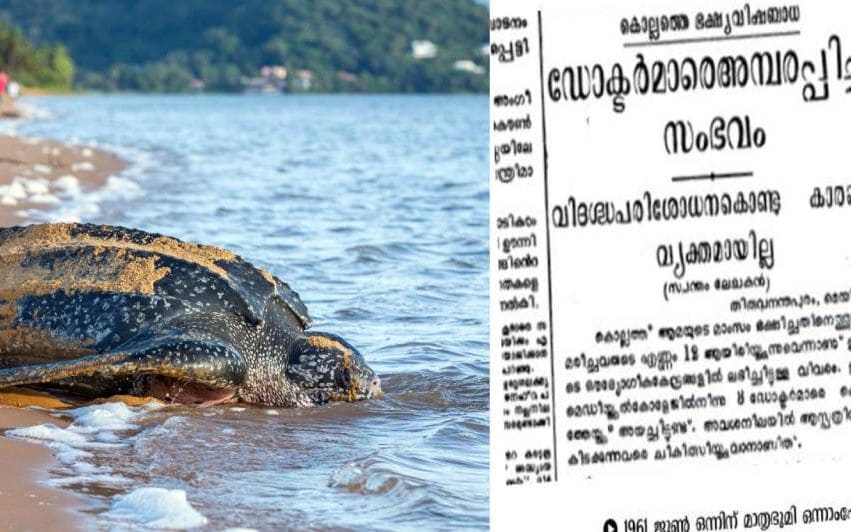 Kollam: When the coastal residents found a huge turtle during heavy rain on May 29, 1961, they were happy that it would be enough to satisfy hunger of many. However, they never thought it would lead to a disaster. The incident in which 32 people died after consuming turtle meat at Sakthikulangara in Kollam turned 60 this year.

John James, one of the survivors of the disaster, recollected memories of the incident. His pregnant wife Stella and sister Brijitha also died in the mishap. John and his parents survived after getting treatment from hospital.

"I was 24 years old. We used to go for fishing. We were all happy when turtles come to the shore for eating water weeds. It has enough flesh to feed many people. Also the shell fetches a good price. So, 15 of us shared the turtle meat. I came home with a little meat in the shell and cooked," he remembered.

"All including my wife and sister had turtle meat and they all died. A total of 32 people died after eating the meat. Everyone had vomiting, diarrhoea and fainting. We thought it was outbreak of cholera. We went to district hospital. Later, the DM came and took the turtle shell. Only then, we realised that turtle meat was the reason," John said.

The crow that ate the remains of turtle meat on the shore also was found dead. Four people of a house died and three of another two families also died. First the children died and then the women. Those who consumed turtle meat after cooking it with turmeric did not suffer much problems.

"The people who were hospitalised survived after getting medicine brought from Norway. Then Indo-Norwegian project was underway in the fishing sector in Kollam. After one year, I got married again. I tied the knot with Kureepuzha native Thressia and we had four children," John narrated his story.

Jaffar Palott, senior zoological assistant in the Zoological Survey of India, said that the presence of Salmonella bacteria in some turtles causes the problem. Back then, not many studies have taken place. Today, we are aware of the health issues caused by the bacteria. It seems that the food poison resulted from Salmonella, he added.

Journey disrupted as window of KSRTC Swift bus breaks after falling into ...