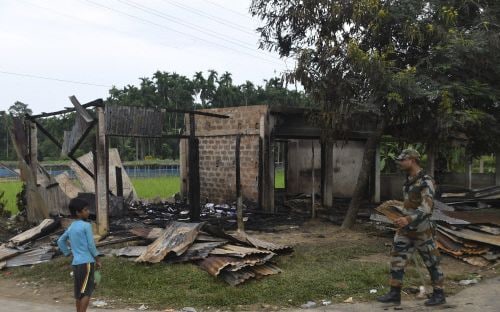 A paramilitary soldier patrols past a shop that was set on fire in Rowa village, about 220 kilometers from Agartala, Tripura, Wednesday, Oct. 27 2021 | Photo: AP Photo

Agartala/Guwahati: The Tripura High Court on Friday directed the state government to file a detailed report by November 10 on the incidents, if any, involving the religious minorities while the Assam government has sounded an alert and asked the district officials to closely monitor the situation in view of the attacks on minorities in Bangladesh.

Hearing a suo-moto Public Interest Litigation, the High Court division bench comprising Chief Justice Indrajit Mahanty and Justice Subhashish Talapatra, directed the Tripura government to give a detailed report on the incidents, if any, and the action taken against the social media posts and fake messages.

A court official said that Tripura Advocate General Siddhartha Shankar Dey told the court that adequate security arrangements were made in the religious places especially those belonging to the minorities and cases registered against the fake social media posts.

Police said that there have been some stray incidents in Tripura since last week after the communal violence in Bangladesh. According to police, some "unidentified people" burnt three shops belonging to the minorities, forcing the north Tripura district authorities to promulgate prohibitory orders under section 144 of the CrPC in Panisagar and Dharmanagar sub-divisions on Tuesday as a precautionary measure.

"Other steps, including providing permanent and mobile patrolling security to the religious places were also taken in and around 150 mixed population places and religious institutions," a police official told IANS on condition of anonymity.

Inspector General of Police (Law and Order), Saurabh Tripathi said that anti-national and mischievous elements on Twitter and Facebook are spreading fake news and rumours. The videos and photos that are being uploaded have no connection with the Panisagar incident. No fire incident took place at any mosque, said the IGP, adding that cases were registered against rumour mongers.

The opposition CPI-M, Congress and the Trinamool Congress accused the ruling BJP of supporting right-wing organisations to gain political mileage in the civic polls to be held on November 25 and the Assembly elections in 2023. The BJP, however, rubbished the allegations levelled by the opposition parties.

In Guwahati, Assam Chief Minister Himanta Biswa Sarma said that the state government has alerted all the Deputy Commissioners and the Superintendents of Police of 34 districts and asked them to undertake additional surveillance in the backdrop of the communal violence in Bangladesh.

"In view of the attacks on the Hindu minorities in Bangladesh, we do not want any counter reaction in Assam. Adequate steps have been taken in all concerned places in Assam. We should believe the Bangladesh government as it is a friendly country. The Government of India might have been aware about the situation in the neighbouring country," Sarma told the media.

As per media reports, mob violence erupted in Comilla on October 13 after unconfirmed posts went viral on social media about the alleged desecration of the Quran at a Durga Puja venue, following which Hindu temples were vandalised. Reports quoting Rana Dasgupta, General Secretary of the Bangladesh Hindu-Buddha Christian Oikya Parishad, said in the communal violence in Bangladesh at least six people were killed and many injured, while at least 70 Hindu temples and scores of houses and properties were damaged in six district across that country.