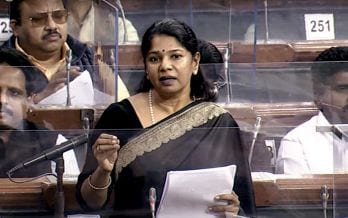 New Delhi: A video of Tamil Nadu MP Kanimozhi criticising the union government for 'meagre' allocation of funds for South India has gone viral. During the debate on Budget 2022, Kanimozhi said only Rs 59 crore is earmarked for building new railway lines for the Southern Railway in the Union Budget 2022. Meanwhile, the Northern Railway got Rs 13,200 crore for the same.

Kanimozhi requested the railway minister to look at the 'disparity'. "You keep talking about India being one nation. Railways also has to understand that it is one nation," she said in the Lok Sabha. He speech is now being shared on social media widely.

Expressing concern over huge vacancies in railways, the DMK MP also said that the South Indians don't get jobs and it seems that there is an effort to keep them away. She demanded the government to clarify as to how 100 per cent electrification can be achieved by next year if it is 73 per cent at present.

Discussions on Demands for Grants in Railway Ministry took place in Lok Sabha on the second day of the second half of the Budget session. The proceedings of the House were extended till 11 pm.

Initiating the debate on Demand for Grants 2022-23 for Railway in Lok Sabha, Congress MP K Suresh accused the Central government of running the railways inefficiently and said it is indulging in jugglery in the allocation of funds.

Govt prepared to deal with any global development: FM