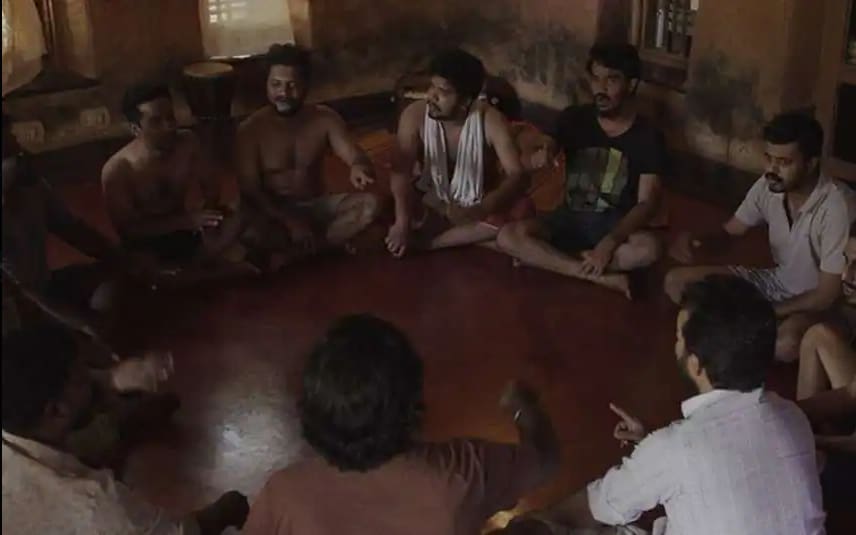 A scene from the movie

Theatre is one of the oldest and influential art forms. Popular arts like cinema evolved from theatre. When theatre is losing its prominence, here is a film that depicts theatre and drama troupes in its fullness. Chavittu/Stomp (2021) is written, directed and edited by Rahman brothers, Shinos and Sajas.

The film opens with a wide shot of a minibus set against a rising sun. We get to see some people unloading musical instruments from the van. Later, we discover that they are the part of a theatre troupe that is about to perform a play at the annual meet of a residents’ association. Adhering to the title, the screen is filled with tight shots of theatrical footsteps and stomps. Rahman brothers follow the cinema verity style of filmmaking. Much of the narrative focuses on extensive practice sessions of the theatre troupe that is about to start their performance.

The documentary style shots of the backstage preparations are juxtaposed with the shots of the residents who render formal felicitation speeches at the gathering. The technique of 'play within film' is employed in Chavittu as the rehearsal sequences form the crux of the film. In these sequences, the members of the troupe sing a theatrical folk song.

The song celebrates social revolution. It is a subtle critique on the pervading class and caste differences in Kerala. As the film progresses further, the tone gets more satirical. We get to see a highly conventional group of people making long and dull speeches on 'culture' and 'tradition'. This satirical tone is achieved by the seamless cuts of Rahman brothers as we get to see the last-minute preparations of the players along with the speeches. The writers do not forget to mock the perceptions of an intellectual elite that form the members of 'Samskara' residents’ association.

The members of Little Earth Theatre group based in Malappuram form the cast of Chavittu. The shots of the ace cinematographer Mukesh Muraleedharan add to the documentary style of filmmaking as intense naturalism is achieved in the film. The original guitar theme by Ajeesh Anto is in stark contrast with the drum beats of the theatrical performance. Since the narrative is carried forward by theatrical dance and folk music, the film can be regarded as a perfect homage to drama, an art form that struggles to survive.

Malayali women should build their own creative spaces than wait for men to give one; says Miriam

A wonder jury on wheelchair at IFFK 2022