Actor Vijay, a reason for my son slowly coming back to life: veteran actor Nassar

In an interview with Tamil actor-cum-director Manobala, Nassar spoke openly about his son Abdul Asan Faisal and his family's relationship with Vijay. 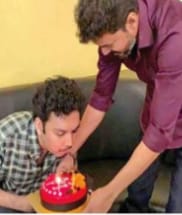 Chennai: Actor Nassar said Tamil actor Vijay is the only person whom his son Faisal recognizes after he lost his memory in an accident.

In an interview to Tamil actor-cum-director Manobala, Nassar spoke openly about his son Abdul Asan Faisal and his family's relationship with Vijay.

"After the accident, my son only remembers Vijay. He is a big fan of Vijay. Sometimes he makes a lot of fuzz about Vijay. We thought Vijay could be one of his friends. Only later we realized it was actor Vijay."

"He calms down when we play songs from any Vijay movies. Presently, Vijay's songs are always played at home. When Vijay was informed about this, he was very emotional. Since then, he would regularly appear on his birthday and give him a present," Nassar added.

"Vijay is one of the main reasons why my son is slowly coming back to life, ”Nassar said.

Nassar's son Faizal met with an accident in 2014 near Mahabalipuram. Even though he recovered from his injuries, he lost his memory.