Synthetic drugs are marketed as ‘legal’, safe and acceptable alternatives to illicit drugs. These drugs are not quality controlled or regulated, so there are concerns over what are the ingredients in them. 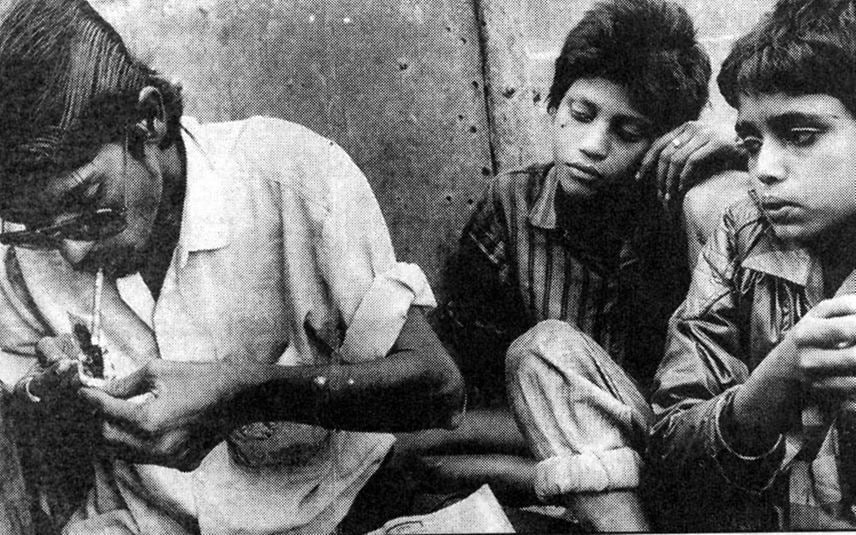 Print and visual media are replete with reports of daily seizures of synthetic drugs or what is known as New Psychoactive Substances (NPS). Most of the seizures are being effected by youth, implying that there is the easy availability of synthetic drugs in educational institutions, ease of access to drugs, and the opinion among students that physical and psychological damage to them is non-existent. Given shifting societal norms regarding the acceptability of drug use, there is increasing concern about adolescents’ use of synthetic drugs. Teens access synthetic drugs in schools, on the street, and through internet purchases.

The situation of synthetic drug use by youth is becoming more and more complicated all over the world. Factors affecting the use of synthetic drugs in young people depend upon personnel characteristics, family circumstances, social factors, and accessibility to the synthetic drug. According to the UNODC (United Nations Office of Drugs & Crimes) World Drug Report 2022, around 284 million people aged 15-64 used drugs worldwide in 2020, a 26 per cent increase over the previous decade. Young people are using more drugs, with use levels today in many countries higher than with the previous generation. Globally, the report estimates that 11.2 million people worldwide were injecting drugs. Around half of this number were living with hepatitis C, 1.4 million were living with HIV, and 1.2 million were living with both. According to UNODC Executive Director, Ghada Waly “Numbers for the manufacturing and seizures of many illicit drugs are hitting record highs, even as global emergencies are deepening vulnerabilities. At the same time, misperceptions regarding the magnitude of the problem and the associated harms are depriving people of care and treatment and driving young people towards harmful behaviours. We need to devote the necessary resources and attention to addressing every aspect of the world drug problem, including the provision of evidence-based care to all who need it, and we need to improve the knowledge base on how illicit drugs relate to other urgent challenges, such as conflicts and environmental degradation.”

Synthetic drugs are addictive and pose a serious threat to the health of everyday individuals. Nevertheless, it is difficult for regulatory agencies to control or monitor synthetic drugs. Illegal manufacturers operating clandestine laboratories often slightly modify the molecular structures of illegal or controlled substances to circumvent existing drug laws.

Young people between ages 12 and 17 are a prime target. Their gullibility and curiosity, combined with easy access to the drugs, are all factors in why many teens try them. Easy access, low prices, and a misconception that synthetic drugs are “natural”, and harmless have likely contributed to synthetic drug abuse.

Another contributing factor is the ability of synthetic drugs to circumvent standard drug tests that cannot easily detect many of the chemicals in the drug. Currently, 133 countries and territories have reported over 1100 varieties of NPS to the United Nations Office of Drug Control Early Warning Advisory up to November 2021. Endowed with the world’s youngest child and adolescent population worldwide, an estimated 700 million Indians are below 24 years of age and the country’s median age is 29. Transnational drug-running mafias have therefore targeted India as a major hub for Narcotic drugs and NPS. The size and depth of the Indian market for 200 drugs and substances prohibited by the Narcotic Drugs and Psychotropic Substances Act, of 1985, has transformed India into the world’s third-largest market for narcotic substances.

• India has over 1000 universities, with a break-up of

11 million students are in the Higher Education System. In addition, there are major educational clusters spread across the country, like:

The Top 9 Cities for Education in India are Bangalore, Pune, Mumbai, New Delhi, Chennai, Kanpur, Hyderabad, and Manipal. Since this is a massive and burgeoning market, drug traffickers and peddlers, are assured of a steady market with guaranteed profits.

At the rate they are produced, it is impossible to predict the complications that users should expect. They are unregulated and untested, and the same product may have different constituents from batch to batch due to which the users are prone to developing overdose which could be fatal. The health hazards scan is physical or psychological, including cardiovascular problems, seizures, renal failure, myocardial infarction, anxiety, agitation, memory loss, depression, psychosis, and suicide. They have also been implicated, through intravenous injections and sharing needles, and thus are at risk of developing life-threatening complications such as hepatitis B, hepatitis C, and HIV/AIDS. In general, side effects of NPS range from seizures to agitation, aggression, acute psychosis, as well as the potential development of dependence.

The most popular synthetic drugs currently in the market are:

India into the world’s third-largest market for narcotic substances.The horrendous rising use of psychoactive substances among youth, particularly students has escalated mental health challenges among them such as memory loss, fatigue, psychiatric diseases, hallucination, social isolation, depression, schizophrenia, and suicidal tendencies. It has also resulted in their participation in drug peddling, violence, and extreme crime. With the aid of the internet, new psychoactive substances are spreading at such a rapid rate that law enforcement agencies cannot respond quickly enough when it comes to identifying and regulating these substances. In many surveys done recently, a high level of substance abuse was found to be present among male engineering students staying at hostels with a higher level found among students of government engineering colleges. In another report dated July 22, 2022, it is revealed that nearly 1200 engineering students, in Hyderabad, including girls pursuing higher education in engineering streams, are consuming narcotic drugs. In Kerala, a report published on June 15, 2022, indicates that engineering college students are using MDMA or Ecstasy drugs to enhance their study performance! A girl student in an engineering college revealed that she was consuming drugs in order to reduce her sleeping hours so that more time can be devoted to her studies. The data sourced from the Kochi City police shows that while 213 students in the age group of 18-24 were booked in NDPS cases in the year 2021, 456 were arrested in the first five months of 2022 itself. Meanwhile, the trend is also widespread in the Ernakulum Rural police limit, as 292 students have been booked in NDPS cases so far in 2022. The cases booked in the year 2021 were 240.

In a recent decision, the Kerala High Court expressed grave concern and observed that the scale of drug usage In Kerala was unacceptably high. A Division Bench of the High Court took note of an alarming report from the State Special Branch that around 400 institutions in the State are affected by drug abuse and out of such educational institutions, 74.12% are schools, 20.89% are colleges and professional institutions and 4.97% are other institutions viz, ITI, Polytechnics, etc. This invariably results in a surge in crime and violence. A major recommendation by the High Court is that the Central and State Education Authorities should include a mandatory and comprehensive chapter on drug abuse and illicit trafficking and its socio-economic costs to self, society, and the country, in the syllabus for 10+1 and 10+2 students.