Has man a future?

Earth Day is an opportune occasion to relive the memories of the victory over a corporate behemoth won by the vulnerable population of Plachimada in the battle for their right to water, and of the people and an institution that supported their valiant struggle 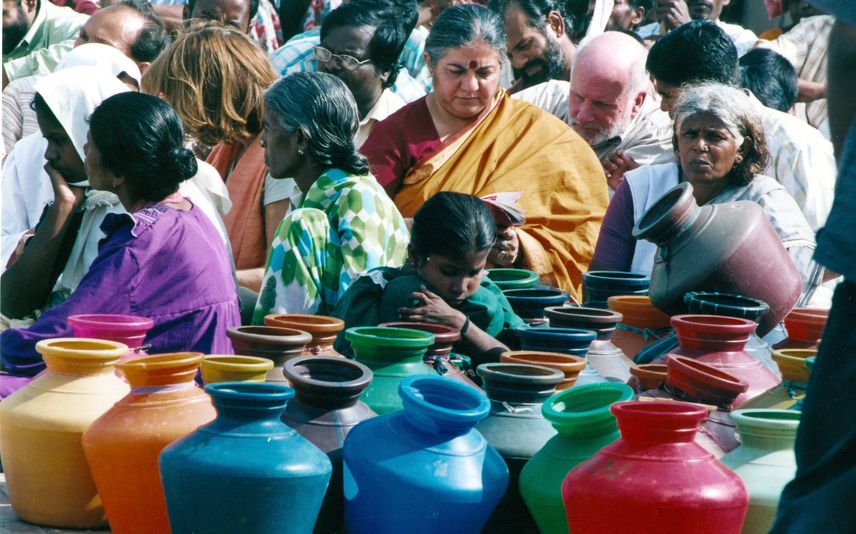 A group of people sit around some vases. Myilamma {right foreground} has an intense look, even as Dr Vandana Shiva is immersed in reading and behind her, the Canadian Tony Clarke of Polaris Institute intently listens to a delegate | photo: C R Girish Kumar

“Can you sell me rain, the water
given to you by your tears, and moistening your tongue?
Can you sell me a dollar of water
from a spring, a pregnant cloud

Water falls, rolls on.
Water rolls on, goes by.
Belongs to no-one, no-one.”

Today marks the 20th anniversary of the formation of the Coca-Cola Virudha Janakeeya Samara Samithy. The struggle in Plachimada was a broad social movement against the commodification of nature’s precious resources. It was waged against the exploitation of water by Hindustan Coca-Cola Beverages Pvt. Ltd., first reported in our news columns in 2001. The protest assumed political contour when the late socialist, Chairman and Managing Director of Mathrubhumi and my father, M P Veerendra Kumar, convinced his own party, Janata Dal, to actively take up the issue.

A landmark event was the three-day World Water Conference from January 21-23, 2004, held in Plachimada and Puthussery {where Pepsi had a bottling plant}. My father’s comrade-in-arms in conceiving this forum attended by over 40 international water warriors, and 500 delegates, was the late Dr. Sukumar Azhikode. I used to feel envious of the energy and enthusiasm both of them showed, when we were all camped together at the centrally located Hotel Indraprastha. Dr Vandana Shiva of Navdanya too gave generously of her knowledge and time. Another pillar of support was Sunita Narain of the Centre for Science and Environment, also of Delhi.

Any mention of Plachimada would be incomplete without referring to the late Myilamma who embodied the indomitable Adivasi spirit. My father had enormous regard for the fighter in her, taking her on a personal tour of the Indian Parliament. Ramdas Alayar and Shaji Anjumoorthy, her dedicated companions, too had accompanied her to Delhi. They too are no more.

I too shared my father’s consideration for Myilamma. I felt a sense of gratification in getting the then Chief Minister, comrade V S Achuthanandan, to financially help with the treatment for her condition of psoriatic arthritis in 2006.

A seminar on water was inaugurated by Vandanaji, attended by Inger Schörling of the European Parliament, Steve Emmott of the European Green Party, the American activist Ward Morehouse, and Dr. Rajendra Singh. Ottawa-based Maude Barlow was another star presenter. Her works include Blue Gold, Blue Covenant, and Blue Future. WWC working chairman and the current minister for electricity, K Krishnankutty, also had a paper.

The public meeting on the 22nd was inaugurated by V S Achuthanandan, the then Leader of the Opposition. Later, P K Vasudevan Nair, the CPI leader said that it was wrong to have supported the move for a hydroelectric project in Silent Valley during his tenure as minister for power and as Chief Minister. In the prevailing circumstances, he said that he would not have done so.

The concluding session was held at Puthussery Panchayat Kalyana Mandapam on January 23. The mobilisation of women, Adivasis and Dalits, the most impacted of vulnerable populations, saw public participation with thousands of ordinary people thronging the venues.

Aflatoon, who was the face of the anti-coke protest in Mehandiganj, Uttar Pradesh, was a special invitee. Being the grandson of Mahadev Desai, Mahatmaji’s personal secretary, his was an auspicious presence.

It will be remiss of me if I were not to place on record my profound appreciation of the dedication and zeal displayed by the staff of Mathrubhumi to make WWC a resounding success. My father’s close friend and our Managing Editor P V Chandran, and the then editor, K Gopalakrishnan needs special mention.

In 2010, a government-appointed high-power committee headed by the then Additional Chief Secretary, K. Jayakumar, had computed a sum of ₹216.24 crore as the cost of environmental degradation and damage suffered by Plachimada dwellers. Till date, no monetary benefit has accrued to those whose livelihoods were lost.

A year later, I too was an MLA, when the assembly unanimously passed the Plachimada Coca-Cola Victims’ Relief and Compensation Claims Tribunal Bill, which is yet to get the Centre’s nod.

Going back in time, on Nov 21, 2003, my father had deposed before the 15-member Joint Parliamentary Committee chaired by Sharad Pawar on pesticide residues in and safety standards for soft drinks, fruit juice and other beverages. In the presentation with 21 annexures, the penultimate paragraph of his 9-page letter addressed Pawarji ran thus: The media turmoil, which has surrounded this issue, has managed to reduce it to a technical and bureaucratic level, confined to testing laboratories and Government files. The human element of suffering stands diluted. I am prompted to quote Bertrand Russell: “Remember your humanity and forget the rest,” in ‘Has Man a Future’?”

Almost two decades on, I too can only echo that eminent philosopher on the occasion of Earth Day: Has Man a Future?

(Writer is the Managing Director of Mathrubhumi)

{English version of the opinion page article in Malayalam in the Mathrubhumi of April 22, 2022}