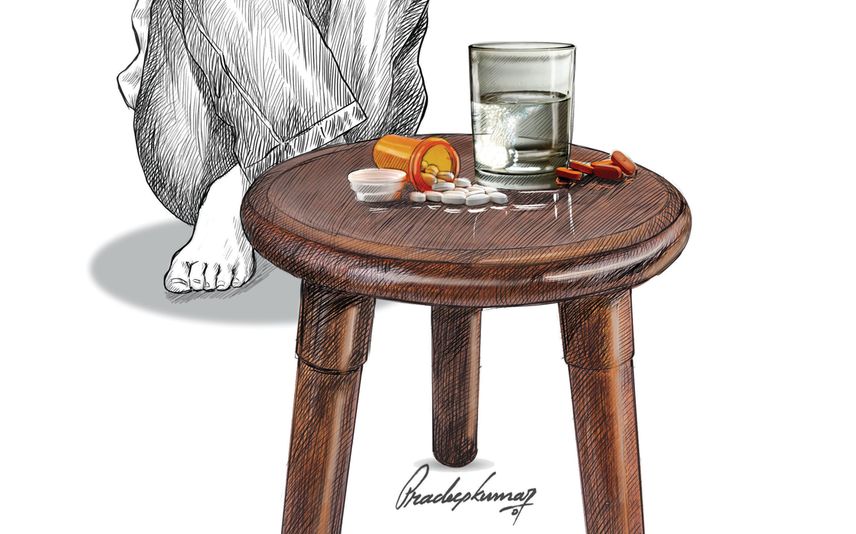 Authorities in Southeast Asia are raising the alarm over a literal cocktail of drugs growing in popularity in Thailand and Myanmar in recent months. The powdered mixture of six psychoactive substances— Caffeine, diazepam, ketamine, MDMA (ecstasy), methamphetamine and tramadol reportedly compose the super drink, marketed as “Happy Water”. It’s unclear whether all substances must be in the mix or if a combination of some would deliver the same effects. It is usually colourless and odourless, which appears in a transparent and liquid state.

This deadly cocktail, which appears to have gained popularity in recent months, is said to induce a state of euphoria without exhaustion, leaving users feeling dreamy, active and energetic. This product is enticing unsuspecting youth to consume these drug-laced products and get intoxicated.

Reports say the beverage produces an extended sensation of pleasure in situations such as playing games or having sex. The cocktail is also known to cause hallucinations. As early as 2009, the United Nations Office on Drugs and Crime (UNODC) reported that a bottled beverage sold as “happy water” began to appear in China.

It can cause abnormal feelings, including tinnitus, hearing sounds of ringing or whistling, feeling the soul leaving the body and strong visual experience. It can make people not respond to stimuli and pain, and the body experiences a loss of balance. It can cause temporary amnesia, and cognitive impairment. Abuser’s urine often contains high concentration of ketamine. Long-term abuse can lead to interstitial cystitis, frequent urination, urgent urination, dysuria, haematuria and incontinence. In severe cases, it may even require bladder resection.

The way of abuse is simple. It can be disguised as normal food or a drink. Young people may be exposed to this kind of drugs at social activities, especially women. These drugs are easily added to their beverages and drinks. There are different packaging methods: it has been found that the drug is stored in colourless lotion bottles and medicine bottles, etc., which makes detection difficult.

The bottled beverage, also known as Kawa Chaoyin in Chinese, was made from a plant called Kava from South Pacific island countries and appeared on the market in 2015, China Daily reports. The drink gained popularity after a Chinese travel TV program made a trip to the South Pacific and used the plant to produce “the happiest beverage ever”. The ‘happy water’ is made by dissolving other drugs – typically ecstasy, methamphetamine, diazepam, caffeine, and tramadol (a painkiller) – in hot water or mixing them with sweetened drinks.

Another version of ‘Happy Water’ by a company called Shine Bee, claimed on the bottles that the drink has functional properties because it contained the beneficial ingredient of gamma-aminobutyric acid (GABA). However, a detailed inspection by food safety authorities showed that the beverage contained a different ingredient with similar name –gamma-Hydroxybutyric acid (GHB), a first-class psychoactive drug.

Myanmar’s Central Committee for Drug Abuse Control (CCDAC) revealed that local authorities had seized packets of “happy water” powder. Each packet was sold for the equivalent of $43, according to the CCDAC, these packets were typically distributed at entertainment venues, bars, and clubs throughout Yangon, Myanmar’s largest city.

The drug trafficking network is currently mixing several drugs and claims that it could intensify the effects. Apart from entertainment venues, these drinks are also being be sold on social media platforms.

Thailand is a very popular tourist destination for Indians. Indian tourists represent the most foreign arrivals in Thailand so far this year 2022. 100,884 Indians arrived between January 1st and May 24th, according to the Tourist Authority of Thailand (TAT). Thailand hopes to welcome around 500,000 travellers from India by the end of 2022. Bangkok, Pattaya and Phuket are the favourite haunts of Indian tourists.

On 30th May 2022 UNODC-SMART Programme in Southeast Asia launched its annual report on “Synthetic Drugs in East and Southeast Asia – Latest Developments and Challenges 2022” in which it has alerted about the emergence of “Happy Water” in the South East Asian drug markets.

The Report states that in addition to new substances emerging on the illicit drug market in the region, the emergence of a new drug product was noticed, sold under the street name of “Happy water”. The product is typically sold online through social media as well as in entertainment venues in liquid or powder form and consumed dissolved in water or other drinks. “Happy water” products may contain a range of different psychoactive substances in varying combinations and concentration. “Happy water” samples seized recently in Thailand, for example, contained MDMA, methamphetamine, diazepam, caffeine, tramadol, and ketamine.

The effects of consuming drug products containing a combination of substances can be unpredictable and dangerous. Most overdoses, including fatal ones, involve use of more than one type of drug.

The influx of Indian tourists into Thailand should alert the Indian Customs, Police and Narcotics Control Board (NCB), and Directorate of Revenue Intelligence (DRI), about ‘Happy Water’ entering the Indian market. As this product is easy to conceal, many traffickers and tourists are likely to be tempted to bring it into the country to make some fast money. Myanmar shares a long land border of over 1600 Km with India as well as a maritime boundary in the Bay of Bengal. Four North-Eastern States viz. Arunachal Pradesh, Nagaland, Manipur and Mizoram share international boundary with Myanmar. India is well connected with Thailand by multiple airlines, operating from all the major metro cities. Majority of the tourists are those seeking pleasures in nightclubs, discotheques, and red light areas. The chances of their getting lured to getting addicted to “happy water” is very high. Their chances of bringing this product into India, clandestinely, is also possible. All enforcement agencies need to be adequately trained to detect clandestine trafficking in this deadly concoction.

Another factor to be considered very seriously is the clandestine manufacture of ‘Happy Water” in India. All the required chemicals are available in India, apart from over ten lakh qualified Pharmacists. There are over 3517 Pharmacy colleges in India, and in the year 2021 about 82,573 students enrolled for B. Pharm course. It is estimated that there are over eight lakh Pharmacists, presently, unemployed in the country. Many would be tempted to manufacture such concoctions in makeshift laboratories, unscrupulous entrepreneurs may also exploit such unemployed Pharmacists to engage in illegal production. The possibility of foreign terror groups recruiting pharmacists, cannot be ruled out. Enforcement agencies have very challenging times ahead.