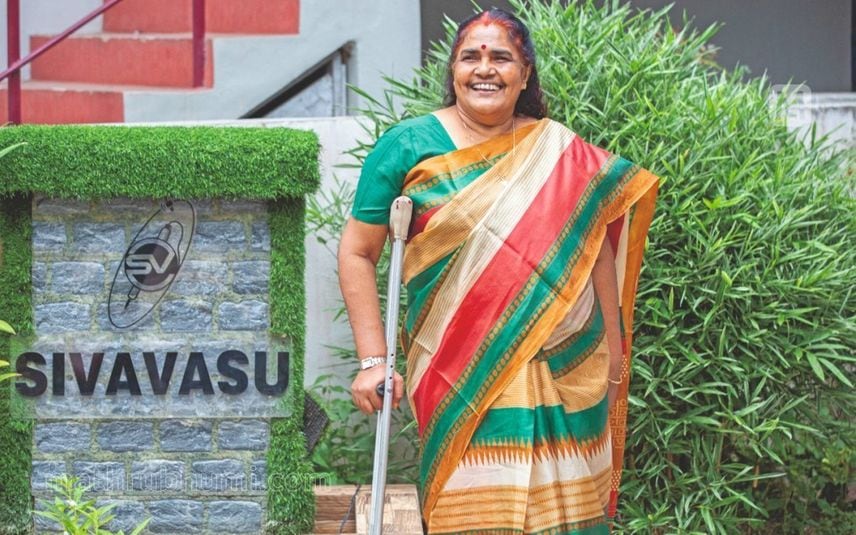 "I decided that I would live without depending on anyone, earning by myself," says Radhambika, the founder of 'Sivavasu Electronics'. She has been walking with the help of crutches as polio affected her right leg. But her transformation from a girl who sat in her dark room to contribute to the nation's proud projects like Mangalyaan, makes her story similar to the wonders of space.

The satellites launched by ISRO for the past 40 years have the touch of Radhambika and her co-workers. Radhambika's 'Sivavasu electronics' in Ambalamukku in Thiruvananthapuram supplies materials for the satellite vehicles and experiments of ISRO.

Sorrows inside a dark room

Radhambika was the sixth among the seven children of Parameshwaran Pillai alias Vasu Pillai and Sarojini Amma. Polio arrived as a villain in her life at the age of two, and her right leg was affected. Since then, she started walking on her knees which filled sympathy in everybody she came across. Her education was also affected as she required support for walking.

"My parents were disappointed that I was handicapped. People laughed at me, and I fell whenever I tried to walk. As I grew up, it was difficult to go out because I feared people's laughter. My parents believed that I wouldn't get married and have a family as I was disabled. The fear of my parents that I would be a liability made me realise that I could do something on my own", she added.

Radhambika studied at Girls Schools in Ambalamukku and later joined Vocational Rehabilitation Centre for Handicapped in Nalanchira. Then, she heard about ISRO's training programme and applied for it.

"It was in 198, the World Health Organisation first celebrated International Day of Disabled Persons. Then Prime Minister Indira Gandhi decided to provide job-oriented courses for the differently abled in public institutions. Seven students were selected for the ISRO training programme. They allowed me to train there for six more months after passing the training and examination. We were asked to start our institutions to assist ISRO in their products which led to the formation of Sivavasu electronics. I took that challenge in 1983 at the age of 23, and ISRO's support was my confidence".

There were only seven members when Radhambika became an employer. Wiring the print circuit board, harnessing, assembling, and testing hardware used in ISRO's satellites and launching vehicles are the works carried out by Sivavasu electronics.

"They allowed us to work in ISRO till the completion of our lab. When the institution came to winning ways, I focused on providing employment opportunities to differently abled students. Now there are 200 workers, of whom 40 per cent are diffently abled, and the majority are women. We also provide job training for I.T.I. electronics and mechanics students with stipends".

My life and family

Students who got training from Sivavasu have been placed in famous institutions like ISRO. Sivavasu contributed massively to the success of Indian space projects like ASLV, Mangalyaan and PSLV. Radhambika is the first contractor of Vikram Sarabhai Space Centre (VSSC).

Sivavasu has established its advanced lab and board chamber as proposed by the standards of VSSC. Radhambika received the national award for the best differntly abled entrepeauner three years ago. The workers testified that she treats them like a mother or sister as she tries to move ahead without hurting anyone.

"The world will stand with us if we desperately wish for something. Many people tried to discourage me by stating that I'm wasting money. Still, the confidence that I would not bow down to anyone and the support from former ISRO directors led me to success," she added.

Radhambika, the successful differntly abled entrepeauner has the strong support of her husband Muralidharan Nair and her children Sree Vinayak and Sree Reshmi.