The Robber Barons who gave us Oil and Climate Change want to create new markets of carbon, new property in nature’s ecological services, reducing Biodiversity and Nature into financial assets to be owned and traded. The ecological emergency is a consequence of the economy of Greed, of making money limitlessly without respect for ecological limits. Money is made the only currency, ignoring the currencies of life. It is made the measure of value, eclipsing the value of caring and sharing, of justice, equality and ethics.

New proposals to address the ecological emergencies are neither sustainable, not just. They deny both the Rights of Mother Earth and human rights of indigenous people, farmers, fisherfolk, women, working people and the poor, the children and future generations.

The Robber Barons who gave us Oil and Climate Change want to create new markets of carbon, new property in nature’s ecological services, reducing Biodiversity and Nature into financial assets to be owned and traded.

The Robber Barons of today, the philanthrocapitalists Rockefeller and Gates, the Blackrocks and Vanguards, are trying to own and privatise all of nature and our lives. They are mutating into “life lords” to whom we will have to pay rents to breathe, eat, drink,… What nature provides for free as a Gift will now be a commodity we “buy” at high cost and through digital social credits in the new economy which builds on the old colonisation .

In 2021, Rockefeller and the New York Stock Exchange launched Intrinsic Exchange Group (IEG) whose mission focusses on “pioneering a new asset class based on natural assets and the mechanism to convert them to financial capital”. A new colonialism, a new ownership, a new enclosures of the commons is being worked out by the Robber Barons who do not merely want to own nature, but also her ecological services . The assets include “Biological systems that provide clean air, water, foods, medicines, a stable climate, human health and societal potential”

The money machine is trying to own the last seed, the last drop of water, the last river, extinguish the last forest and last farm, the last insect and blade of grass. Creating fictitious currencies, and fictitious finance, nature is being reduced to a “financial asset”, to be miraculously multiplied to $4000 trillion.

Wall street and the financial asset companies are seeing a $ 4000 trillion fictitious economy of finance by extracting profits from goods and services from “Nature’s assets”. This commodification is an enclosure of the commons of life. When the last river, forest and land is enclosed as an asset, the custodians will be displaced people, without access to land, forests and water and their earth centred livelihoods.

It is misleading to call the latest stage of colonial commerce “Nature’s Economy” as the Intrinsic Exchange Group (IEG) refers to it. The Natural Asset Management Companies have been created by the IEG which is the Rockefeller Foundation , the New York Stock Exchange and the Latin American Bank .

“The ultimate goal of NACs is not sustainability or conservation – it is the financialization of nature, i.e. turning nature into a commodity that can be used to keep the current, corrupt Wall Street economy booming under the guise of protecting the environment and preventing its further degradation.”

The 2008 financial crisis was the result of the financial Robber Barons magically expanding the $90 Trillion economy of real goods and services like homes and food into a fictitious $512 trillion financial economy. The Financial economy grew at the cost of millions who were unhoused and unfed as a result. The more the real world is turned into a financial asset, the more homelessness and hunger grows. 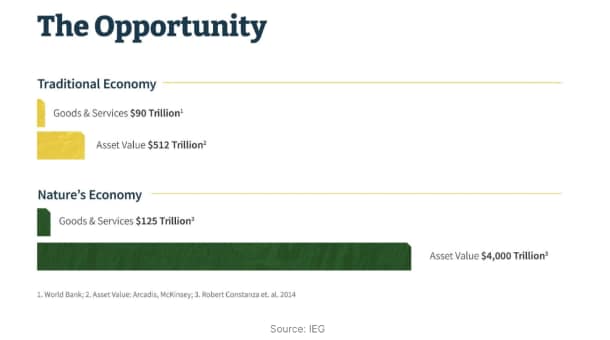 This is a violation of Nature’s Economy, Rights of Mother Earth, Rights of all beings and Human Rights.

Creating new algorithms to multiply finances and increase financial resources cannot regenerate the life lost in nature through ecological destruction. You can convert nature into cash through extractivism and speculation. But you cannot turn cash into nature.

An African peasant captured the ontological and ecological difference between money and life with a simple metaphor.

As Money and finance becomes more removed from nature’s economy and the real economies of sustenance that people create, as finance multiplies mysteriously, gets concentrated in the hands of a few billionaires, their Asset Management Funds, and the corporations they own.

Rockefeller, Gates, Wall Street and Black rock cannot become defacto owners of the Earth and her gifts. Their profit making accounting systems are too impoverished to see and protect her biodiverse richness, her complexity , her self organisation, her generosity and abundance. Their greed has already pushed millions to hunger, homelessness, disposability.

It is time to remember the prophecy of the Cree Indians

“When the last tree is cut down, the last fish eaten and the last stream poisoned, you will realize that you cannot eat money.”

On World Environment Day, meet this man who turned 4-acre land into forest