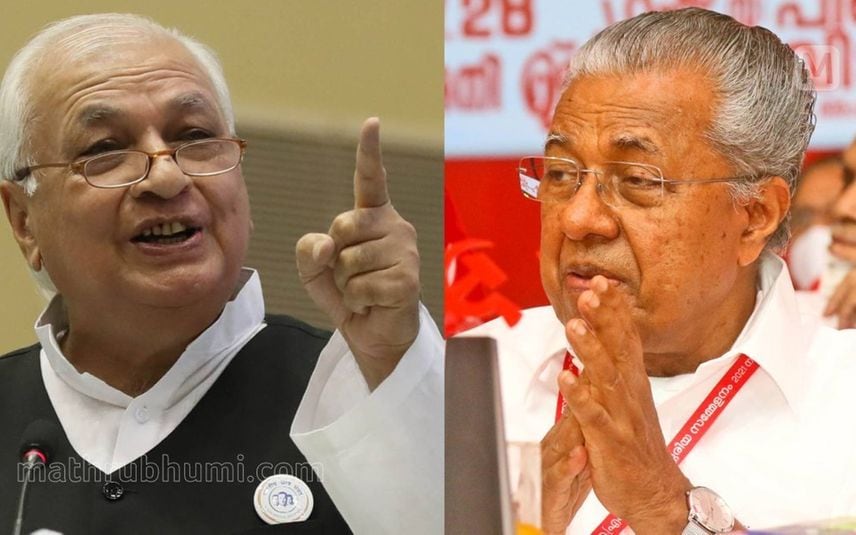 Nobody in their senses could ever dispute that Kerala’s higher education sector suffers from many serious issues, and political meddling is the most troubling among them. Yet, it hardly justifies Kerala's Governor Arif Mohammad Khan's unedifying conduct of recent times. His media conference at Raj Bhavan to attack the government was unprecedented even in a state which has seen many altercations between governors and governments. The much-awaited “proof” of the attempts on him ended with a whimper. Khan exceeded all constitutional decorum by waxing on the “violent political ideology” of the government, its paying pensions to ministers’ staff, etc. Many things Khan said may be correct. But he forgot that it was utterly unbecoming of his constitutional position to have said most of what he said. Particularly his brazen political comments. An elected government has the right to make its policies, and the elected opposition and every citizen have an equal right to oppose them or even force them to be withdrawn. But this right is not available to a Governor appointed by the President on the recommendation of the Central government.

B.R Ambedkar said during the debate in the Constituent Assembly on the authority, “The Governor has no functions which he is required to exercise either in his discretion or in his individual judgement. According to the Constitution, he is required to follow the advice of his ministry in all matters..”

Article 154 of the constitution, which vests the Governor with the executive power of the state, cautions; “Nothing in this Article shall be deemed to transfer to the Governor any functions conferred by any existing law on any other authority or prevent Parliament or the Legislature of the State from conferring by law functions on any authority subordinate to the Governor.

It was to avoid the misuse of the post and distortion of democracy that Justice Sarkaria Commission laid down in 1988 three criteria for selecting a Governor. 1. A politician from the federal government's dominant party should not be appointed Governor of a state ruled by another party or coalition. 2. He must be nominated only after consulting with the state Chief Minister. 3. He should be a well-known figure in some fields.

The nine member-bench of the Supreme Court unequivocally ordered in the 1974 Shamsher Singh case that the President and Governors are constitutional heads of governments like the Crown in England and must act only on the aid and advice of their ministers in all matters, whether those are executive or legislative in character.

A crafty politician who has played every stock-in-trade game during his half-century-long career, Khan has been using all his brinkmanship skills in the ongoing war. His exalted position hasn't prevented him from meeting the media daily to unleash his tirade against all his detractors. He called Kannur University’s vice chancellor Prof Gopinath Ravindran a criminal, and the eminent veteran historian Irfan Habib, a goonda. He threatened Chief Minister Pinarayi Vijayan that he would make public all the correspondence made between them. Throwing to the winds the constitutional obligation of governors to be independent and non-partisan, Khan lambasted Communism (of course, cleverly by half) as an ideology that originated outside and one that perceived violence as a political tool.

Khan had no qualms about accusing the 90-year-old Irfan Habib of having attempted to assault him! Or was it to assassinate? The videos he presented hardly proved his claims. Ditto with Khan’s allegations against K.K.Ragesh or Gopinath Ravindran. Even as the spat was making headlines, the “independent and nonpartisan” governor took time to pay a visit to RSS Sarsanghchalak, Mohan Bhagawat at Thrissur. “Is RSS a banned organization?” he quipped when asked why he did it and said he had been close to RSS from 1986. Pinarayi Vijayan, who showed uncharacteristic restraint until now (even when the CPI(M) and Congress attacked him during the CAA agitations), is presently leading a counterattack.

Equating Khan's undermining the fundamental tenets of constitutional federalism with slogan shouting by the audience or even Habib's protest at Kannur is preposterous.

Though Khan’s conduct is unprecedented, heated, and ugly, disputes involving governors are not new to India. There have been umpteen altercations in many states, especially when the governments and governors belonged to different parties. The need to have the post of governor itself was debated much in the Constituent Assembly as it smacked of a colonial tradition. A remnant of the colonial past, the British exercised their hegemony in the regions through it. Even the practice of Governors being made the Chancellors of Universities too belonged to the colonial past. Ultimately, the gubernatorial post became a political football for whichever party came to power at the centre. They dismissed governors posted by earlier governments, appointed their own people, and got them to cause trouble to state governments run by other parties. Today, the Governor’s post carries the twin baggage- being a remnant of colonial hegemony on the one side and the central government's political tool to bully state governments run by opposition parties on the other.

Kerala witnessed the first instance of misusing the constitutional provision (Art. 356) by a Governor at the Central government’s behest in 1959 to dismiss its first government. The President sacked the first EMS government following Governor Burgula Ramakrishna Rao’s recommendation citing the alleged collapse of law and order. Later, the 1980s witnessed some of India's most virulent political controversies over governors' actions. The worst was the dismissal of Andhra Pradesh’s 20-month-old N.T. Rama Rao government in 1984 by Governor T. Ramlal to pave the way for a dissident leader N. Bhaskara Rao, to please Prime Minister Indira Gandhi. Indira had toppled governments in J & K and Sikkim in similar ways. Ironically, the Janata government, which came to power in 1977, valiantly fought Indira’s authoritarianism and started the trend of dismissing Governors appointed by other governments. The Janata government under Morarji Desai dismissed as many as 15 Governors appointed by the previous Congress government! When Indira returned in 1980, she hit back, showing the door to many Governors. The 1989 V.P. Singh-led United Front government backed by the Left and the BJP, promising to cleanse the nation of the corrupt Congress government led by Rajiv Gandhi, created a record by dismissing all the governors!

Even as the Governor's role and authority as chancellor of the universities are being hotly debated in Kerala, similar conflicts are boiling in many other non-BJP states like Tamil Nadu, West Bengal, etc. In Kerala, a similar issue surfaced in 1980 when Kerala's first woman Governor, Jothi Venkatachalam - a former Congress leader from Tamil Nadu - appointed A.V.Varghese as the Kerala University vice-chancellor, which was against the wishes of the Nayanar-led government. A decade later, Chief Minister Nayanar had a run-in with Kerala’s second woman Governor, Ram Dulari Sinha, also when she made some appointments to Calicut University Senate in 1989. Sinha also was believed to have been batting for Congress.

Kerala’s most dramatic political tussle involving the governor too occurred during Venkatachalam’s period. This followed Venkatachalam’s questionable decision in 1981 to invite K Karunakaran even before he proved the majority to form the government after Congress (U) led by A K Antony and Kerala Congress (Mani) walked out of the Nayanar government. The tottering Karunakaran government was kept in power by Speaker A C Jose, casting his vote seven times in the assembly for the “casting sarkar,” which collapsed after three months.

One of the earliest altercations between the governor as chancellor and a state government occurred in Tamil Nadu in 1985. Governor S.L Khurana, appointed by the Congress government, antagonized the M.G. Ramachandran-led AIADMK government by rejecting its nominee (C.A.Perumal) as the vice chancellor of Madurai Kamaraj University and picking another (S Krishnaswamy). But the biggest clash over the governor’s appointment of vice chancellor occurred in West Bengal between the CPI(M)-led government under Jyoti Basu and the Congress-appointed Governor A.P.Sharma in 1984. Sharma rejected the Basu government’s nominees for Calcutta and Burdwan Universities and selected others. Basu was enraged and asked his ministers to boycott Sharma and passed an amendment to curtail the chancellor’s powers which Sharma refused to sign. The dispute grew so worse that Sharma finally resigned as his brazen ways embarrassed even the central government. Sharma subsequently created another questionable act by joining the Rajya Sabha, which made the Sarkaria Commission recommend in 1988 that no governor should take up political positions after their term. Let’s wait and watch for the next episode in Khan’s tenure. Jagdeep Dhankar seems to have set himself a model for many to aspire to.