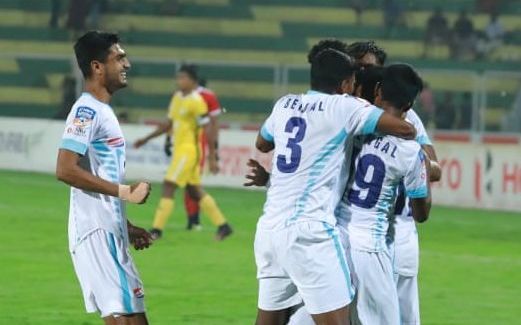 Manjeri: West Bengal sailed into the finals of the Santosh Trophy tournament after defeating Manipur 3-0 in their semi-final match in Payyanad stadium on Friday. Two early goals from Sujit Singh and Mohammad Fardin Ali helped Bengal take an early lead in the first half. Dilip Orawn(74) also found the back of the net to finish off the match in style.

Manipur played an aggressive football but failed in front of the goal. Bengal goalkeeper Priyant Singh played a significant role with a couple of good saves in both halves of the match.

It took only 2 minutes for Sujit Singh to find the opener for West Bengal from the pass of Mohammad Fardin Ali Molla. The defensive blunder from Manipur helped Fardin take the lead to 2-0. A defensive error from Manipur defenders helps Fardin dribble past two defenders slot home the second goal of the night.

Manipur managed to keep Bengal at bay and continued to play dangerous balls into the box. Meantime, Bengal struggled to dominate the second half despite a good early start in the first half. Priyant Singh, who was phenomenal for Bengal, stands between goal and Manipur's exertion to score one back. Sudhir Laitonjam and Shirak continued to pose a threat to Bengal.

Dilip Orawn netted the third goal for Bengal in the 74th minute to make it 3-0. His misguided cross hit the side of the bar and fell directly into the back of the net. Manipur goalkeeper failed to read the cross.

West Bengal will now face Kerala in the finals of the Santosh Trophy at Payyanad Stadium on May 2, 2022. Kerala booked tickets to the final after defeating Karnataka 7-3 on Thursday. Kerala last met Bengal in the 2018 Santosh Trophy Final. Kerala beat them 4-2 in the shootout to lift Santosh Trophy after a gap of 14 years.

Bengal produced a dominating performance, thanks to a brilliant display from Fardin. However, Manipur came back from two-goal down to dominate the second quarter of the game. Goalkeeper Priyam Singh managed an incredible double save to get past the danger posed by Manipur from corners. Bengal's defence held on until the referee blew the final whistle to end the first half.