Goals from Pronay Halder in the 29th minute and Michael Soosairaj in the 43rd minute decided the contest in favour of the visitors. 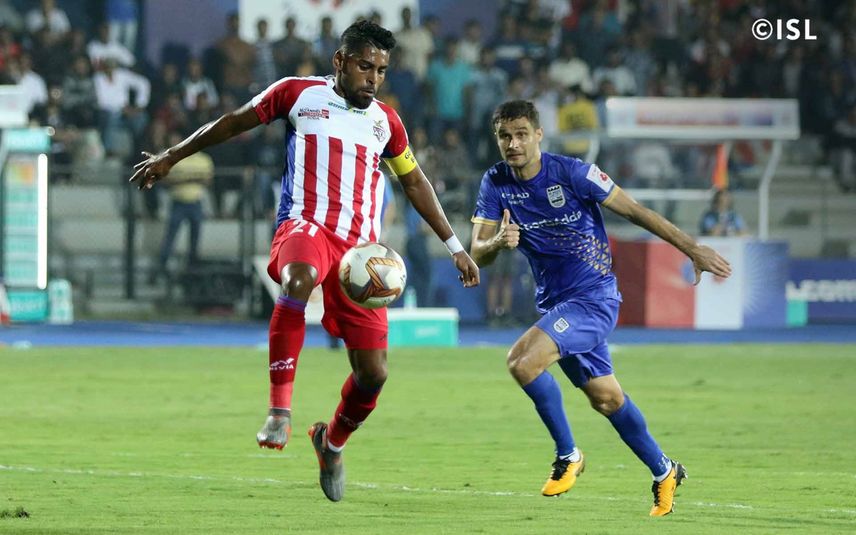 Goals from Pronay Halder in the 29th minute and Michael Soosairaj in the 43rd minute decided the contest in favour of the visitors.

The result moved ATK to the top of the table with 21 points from 11 games. The Kolkata giants are ahead of FC Goa, who have the same number of points, on better goal difference.

Mumbai remains in the fourth spot with 16 points from 11 games. However, the islanders could be overtaken by Jamshedpur and NorthEast United if they can get better results.

The match was not as one sided as the result showed on paper but Mumbai just could not put the ball in the back of the net.

While Jorge Costa kept his usual 4-3-3 formation, Antonio Lopez Habas switched from his usual 3-5-2 to a 4-3-1-2 formation. Both teams made their intentions clear from the first whistle and went for each other’s throat.

For the first 15 minutes, Mumbai were the better side and created a number of chances. ATK defended well and the Mumbai frontmen were wasteful in front of goal.

The Kolkata side soon got a foothold in the match and started countering. The first goal came from the unlikeliest of scorers in Pronay Halder in the 29th minute.

Javier Hernandez played the ball to Roy Krishna. Roy played a beautiful ball with the outside of his foot for David Williams who made a run down the left flank and into the penalty box. Williams got to the byline, looked up and saw Pronay Halder running in. Williams put the ball on a platter for Halder, who made no mistake and tucked the ball into the bottom right-hand corner.

However, Pronay Halder’s celebrations was cut short as he pulled his hamstring and was substituted by Michael Soosairaj. The substitution proved crucial as Soosairaj scored just before half time and cleared off the line late in the second half.

In the 43rd minute, a long ball came in towards Roy Krishna, who flicked it towards the left flank for Michael Soosairaj. He brilliantly opened his body up and curled the ball into the far corner. Amrinder Singh in the Mumbai goal was helpless as the ball went in to the net off the post.

In the second half, Mumbai were more attacking but could not finish off their chances. Some last ditch defending from ATK also kept their two goal advantage intact. In the 73rd minute, Michael Soosairaj cleared the ball off the line.

There was a seemingly controversial decision against Mumbai in the 82nd minute.

Modou Sougou challenged ATK keeper Arindam Bhattacharja for a high ball in the six-yard box. The keeper dropped the ball after what looked like minimal contact from Sougou. The Mumbai striker reacted first to put the ball in the back of the net. However, the referee blew the whistle for a foul on the keeper.

A minute later, the crowd witnessed what could be the miss of the season.

Diego Carlos took a corner from the left flank and it went to the far post. Subhasish Bose knocked it back across goal were Serge Kevyn was waiting just two-yards out. Somehow, the Mumbai man managed to head the ball off target and the ball went just outside the post. It was easier to score than miss from that kind of rage.

Mumbai were unlucky as they hit the crossbar in injury time. Diego Carlos once again put in a cross from the left. Modou Sougou headed it towards goal but it hit the crossbar and came out. The ball fell to Serge Kevyn, whose shot was blocked by the ATK defense and cleared away.

Mumbai City players and their coach Jorge Costa would be wondering how on earth did they not score. ATK will be happy about the three points and concerned about Pronay Halder and David Williams, who have seemingly picked up hamstring injuries.