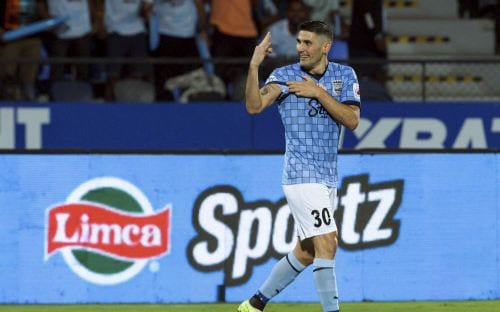 Mumbai: Mumbai City FC head coach Des Buckingham was pleased with how consistently his team have been executing their plans as The Islanders beat Bengaluru FC in the Indian Super League (ISL) at the Mumbai Football Arena, on Thursday.

The result sees Buckingham's side move up to the second place, just one point behind leaders Hyderabad FC. Buckingham was delighted with his team's performance against BFC and the Englishman heaped praise on his squad as they extended their unbeaten run this season.

Talking about Mumbai City scoring six goals in their last game and four against Bengaluru FC on Thursday's game, Buckingham said that for them its about trying to get better in every game and they have shown different ways that Mumbai City can play.

"I'm happy with the result and the performance. It's about trying to get better in every game and we've shown different ways that we can play. To have four goals is very good. But that won't be the case every week and we won't get carried away with results and performances. We go to Guwahati in eight days and we got to take it one game at a time. And the players that we have are very humble and grounded. Overall, I am very happy. And the clean sheet as well, which is the third of the season," ISL.com quoted Des Buckingham as saying.

Speaking about their 8 matches' unbeaten run in the tournament, Buckingham said, "I keep coming back to the AFC Champions League, our approach and how important it was to our team and club. We have had a very small turnover of players. We've changed four foreign players. Sanjeev (Stalin) and Bhaskar (Roy) are the other domestic players that we brought in. To retain that core and to have 14 months of working with this group, they're very clever in what we do and how we do it. What we are trying to see now is the consistency to what we do and how we do it," he added.

"That's the pleasing thing for me. In the Durand Cup 2022, we wanted to be as successful as we could and we made the final. We couldn't quite get the trophy, but we also used that competition to make sure that we started the ISL season as well as we could. Looking back at what we planned and what we wanted, we certainly achieved that. It's important that we consolidate it (on this unbeaten run) and we move forward," said the Mumbai City FC coach.

"To add to the last game, we had six different goalscorers. It's nice. I spoke about it last year when we had Igor Angulo and when he stopped scoring, the team wasn't able to score. We have been creating opportunities from different areas to allow us to win the game and perform. We have recruited players to play the style that we have wanted and that started back 12 months ago in January. By doing the work that has been done on and off the field, the development of these players, and the development of our playing style; we are starting to be able to open up teams and play in different ways that allow goals to come from different ideas; which makes us unpredictable," The Mumbai City FC coach praised the players.

'If teams try to stop us doing one thing, we have got something else. That's the pleasing thing for me and we've had three Indian goalscorers on the scoresheet tonight. We spoke about being the club that wants to develop, recruit and have the best young Indian players here at Mumbai City FC and they get a chance to do that. But it's also excellent seeing our Indian players and our six foreign players developing as individuals and as a team," he further stated. (ANI)