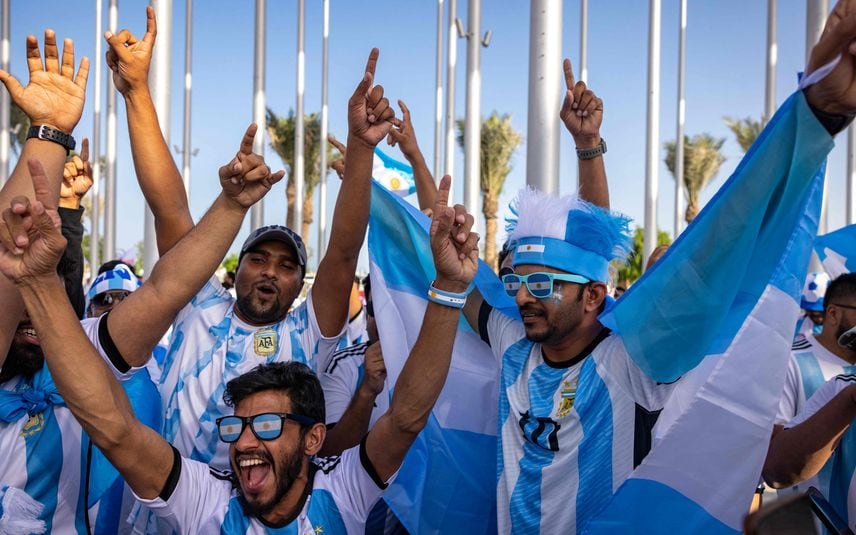 Doha: World Cup organisers on Wednesday came to the defence of Indian fans in Qatar who have been labelled "fake" for wearing the shirts of football's powerhouse nations.

Thousands of supporters, mainly from India and other South Asian nations, took part in a parade in Doha that sparked suggestions they had been paid to wear Argentina, Brazil and England shirts as a stunt to promote the tournament.

The Indian fans have been outraged by the accusations, insisting they are passionate about the sport.

Now the Qatar organising committee has weighed in, issuing a strongly worded statement, backing the contribution of the fans.

"Numerous journalists and commentators on social media have questioned whether these are 'real' fans," the statement said.

"We thoroughly reject these assertions, which are both disappointing and unsurprising.

"Qatar, and the rest of the world, is comprised of a diverse range of football fans, many of whom share emotional connections with multiple nations."

There are more than 750,000 Indians and 400,000 Bangladeshis in Qatar's population of 2.9 million and they account for a huge number of tickets bought for the World Cup, which starts on Sunday.

Indian fans of England outnumbered local British expatriates by nearly 10 to one in the crowd of about 200 that welcomed the England team to their hotel on Tuesday.

"This is degrading, there is a lot of frustration," said Ameen Sharak, an Indian resident of Doha, referring to the accusations.

Sajidh, another Indian fan in Qatar, said the community had been "outraged" by the reports after their parade last Friday.

"It is purely fake news and I would like to say loud and clear that none of us have been paid in any way," added Sajidh, who gave only one name. "We are diehard England fans."

The Doha march was dominated by supporters from India wearing Argentina, Brazil and England shirts.

Fans who took part said it was organised on social media groups and through WhatsApp.

"This has hurt us a lot," said another fan, Anas. "People just do not realise how much football excitement there is in Kerala.

"We watch the Premier League every weekend. We come from India but they have not qualified so people choose the team they want to support."

Qatar has predicted that more than one million fans will visit the tiny Gulf state during the 29-day tournament. More than 70,000 Mexicans and 30,000 Argentinians are expected, according to their embassies.

The Qatar organisers said they wanted the event to be "a moment that connects fans from all over the world, no matter how they choose to support their favourite teams".