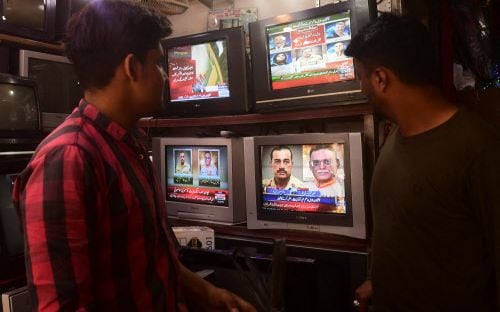 People watch a news television broadcast of the nomination of the next Pakistan's army Chief General Syed Asim Munir (on bottom R television 2R), at a market in Karachi on November 24, 2022. - Pakistan's government nominated on November 24 a former spymaster to be the next military chief, a position long considered the real power in the nuclear-armed Islamic nation of 220 million people. Photo: AFP

Islamabad: Pakistan named a former spymaster as the next military chief on Thursday, a position long considered the real power in the nuclear-armed Islamic nation of 220 million people.

Syed Asim Munir, currently quartermaster general, will replace General Qamar Javed Bajwa, who is retiring this month after serving as chief of army staff since November 2016.

"It is a good sign that a matter that has caused uncertainty in Pakistan has settled amicably," he said.

Pakistan's military, the world's sixth largest, holds undue influence over the nation and has staged at least three coups since independence in 1947, ruling for more than three decades.

Even during periods of civilian rule, the army chief has long been considered the real kingmaker and the appointment is freighted with huge political significance.

The army chief also has to handle multiple domestic security threats from rising militancy, as well as the delicate balance of power with arch-rival India, against whom Pakistan has fought three wars.

Munir, the most senior of six officers considered for the top job, previously served as head of the Inter-Services Intelligence (ISI) spy bureau.

He takes over at a time when Pakistan is riven by political strife, with former prime minister Imran Khan rallying supporters to stage mass protests pressing the government to call a snap election.

"The political process is very weak and democratic institutions are almost at a collapse," analyst Zahid Hussain told AFP.

"In this situation, the army automatically becomes an arbiter of power."

Khan was ousted by Shehbaz Sharif in a no-confidence vote in April after the economy went into a tailspin and he lost the support of the top military brass.

Pundits have suggested Sharif's coalition picked that moment to secure the right to select the next army chief, who will steer elections due no later than next October.

Munir served as ISI chief under Khan, but his stint ended in June 2019 after just eight months following a reported falling out with the former cricket star.

Khan has held a series of mass rallies since leaving office, frequently making unfounded claims he was ousted by a US-led foreign conspiracy and questioning the military's role in politics.

He ramped the rhetoric higher still this month, accusing Sharif and an army officer of plotting an assassination attempt in which he was shot at a rally in eastern Punjab province.

Outgoing army chief Bajwa said in a farewell address Wednesday anyone trying to create a divide between the people and the military "will not succeed".

"The military has been exercising restraint but everyone should know that this patience has a limit," he said.

Khan is set to appear at a rally on Saturday in the garrison city of Rawalpindi, adjacent to Islamabad, for his first public appearance since he was shot.

Khan-led protests in May spiralled into 24 hours of chaos, with the capital blockaded and running clashes across Pakistan between police and protesters.

Authorities have erected a ring of steel around the capital ahead of Saturday's gathering, with hundreds of shipping containers placed near key routes to be used as roadblocks if the demonstrators push towards the city.