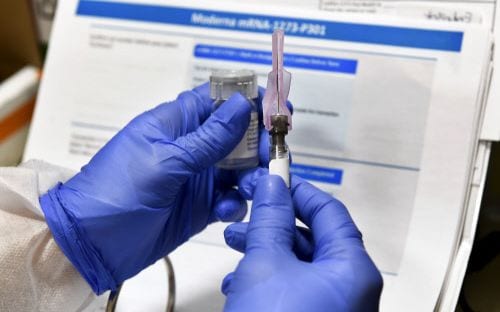 ​London: After the news broke that 23 elderly patients died in Norway following their immunization with the Pfizer-BioNTech mRNA vaccine against Covid-19, the country has launched a detailed investigation into the reported fatalities that has shocked the world.

"It may be a coincidence, but we aren't sure," Steinar Madsen, medical director of the Norwegian Medicines Agency (NOMA), told the BMJ.

"There is no certain connection between these deaths and the vaccine."

Two Covid-19 vaccines, Comirnaty, from BioNTech/Pfizer and Moderna, are being used in Norway.

The agency has investigated 13 of the deaths so far and concluded that common adverse reactions of mRNA vaccines, such as fever, nausea, and diarrhoea, may have contributed to fatal outcomes in some of the frail patients.

"There is a possibility that these common adverse reactions, that are not dangerous in fitter, younger patients and are not unusual with vaccines, may aggravate underlying disease in the elderly," Madsen was quoted as saying.

"We are now asking for doctors to continue with the vaccination, but to carry out extra evaluation of very sick people whose underlying condition might be aggravated by it."

In a statement, Pfizer said: "Pfizer and BioNTech are aware of reported deaths following administration of BNT162b2. We are working with NOMA to gather all the relevant information.

"All reported deaths will be thoroughly evaluated by NOMA to determine if these incidents are related to the vaccine. The Norwegian government will also consider adjusting their vaccination instructions to take the patients' health into more consideration."

More than 20,000 doses of the vaccine have been administered over the past few weeks in Norway and around 400 deaths normally occur among care home residents every week, reports the BMJ.

Chinese publication Global Times first broke the story, saying that health experts in the country have called on Norway and other countries to suspend the use of Pfizer's mRNA-based Covid-19 vaccine, after at least 23 deaths were reported post-vaccination.

"All the deaths have occurred in frail, elderly patients in nursing homes. All are over 80 years old and some of them over 90," Norwegian media NRK reported.

According to the BMJ, the UK's Medicines and Healthcare Products Regulatory Agency (MHRA) said that details of all suspected reactions reported in association with approved Covid-19 vaccines would be published along with its assessment of the data on a regular basis in the future.