COP27 opens with inclusion of 'loss and damage' in agenda; India hopes for fair negotiations 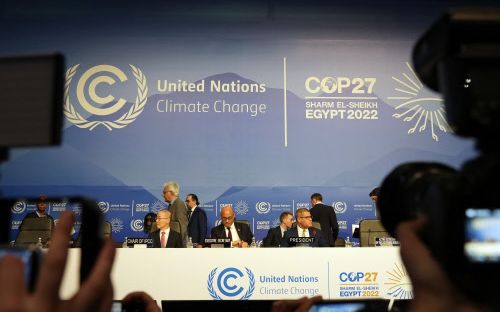 New Delhi: The United Nations' climate change summit opened in Egypt on Sunday with the inclusion of 'loss and damage' finance in the official agenda and India hoping that fair negotiations on it would follow.

Loss and damage is a term used to refer to the consequences of climate change that go beyond what people can adapt to, or when options exist but a community doesn't have the resources to access or utilise them.

Financing or a new fund for addressing loss and damage -- for example money needed for relocating people displaced by floods -- has been a long-pending demand of poor and developing countries, including India. But rich countries have avoided discussions on it for over a decade.

"With the inclusion of this agenda item, India will be engaging constructively and actively on the subject during the course of discussions at COP27 and hoping that fair negotiations on loss and damage follow," read a blog post written by Union Environment Minister Bhupender Yadav.

He said financial mechanisms under the United Nations Framework Convention on Climate Change, such as Global Environment Facility, Green Climate Fund and Adaptation Fund, are under-funded and are not able to mobilise or deliver funds for loss and damage due to climate change.

Accessing funding from these mechanisms is complex and time taking. Adaptation funding is highly inadequate and loss and damage funding has been almost negligible. Taking note of the situation, India along with other countries had been pursuing the adoption of an agenda item on loss and damage finance, the minister said.

"India believes COP27, themed 'Together for Implementation', should turn out to be the 'COP for Action' in terms of climate finance, technology transfer and capacity building.

"The scale of the problem facing the world is huge. Action cannot be delayed and hence concrete solutions must come up and implementation must start with COP27," Yadav said.

The 27th edition of the Conference of Parties (COP) to UNFCCC will also see the country seeking clarity on the definition of climate finance.

The absence of a definition of climate finance allows developed countries to greenwash their finances and pass off loans as climate-related aid.

"India is very clear that the world needs a multilaterally agreed definition of climate finance. India does not recognise loans to be climate finance because it pushes vulnerable countries further into debts. Our focus at COP27 during our negotiations is thus on concessional and climate-specific grants," Yadav said.

He said India espouses the power of individual action, but reiterated that those historically responsible for the climate crisis can no longer shirk responsibility.

At the talks, India will also emphasise that it is one of the few countries which has met the 2015 climate goals set in Paris, and stress on climate justice and sustainable lifestyles through Prime Minister Narendra Modi's 'LiFE movement' which stands for "Lifestyle for Environment".

LiFE stands for "Lifestyle for Environment", a pro-people and pro-planet effort that seeks to shift the world from mindless and wasteful consumption to mindful and deliberate utilization of natural resources.

Yadav said India believes that climate action starts at the individual level and that PM Modi through the "LiFE movement" has provided a simple solution to the complex problem of climate change.

Yadav inaugurated the India Pavilion at the 27th Session of COP of the UNFCCC in Sharm El-Sheikh, Egypt, on Sunday. COP27 is scheduled to run from November 6 to 18.

Welcoming delegates from all the countries to the India Pavilion, Yadav said PM Modi has provided a simple solution to the complex climate change problem.

He said India believes that climate action starts from the grassroots, individual level and hence designed the India Pavilion with the theme of "LiFE - Lifestyle for Environment".

Yadav said the India Pavilion will continue to remind the delegates that simple lifestyle and individual practices that are sustainable in nature can help protect mother earth.

The minister said India looks forward to substantial progress in the discussions related to climate finance.

"We also look forward to the introduction of new technologies and new collaborations to facilitate technology transfers," a Union Environment Ministry statement quoting the minister said.

Yadav also attended the ceremonial opening of COP 27 where Egypt took over the COP Presidency from the UK.

Over 120 heads of states and governments are expected to attend the conference, including US President Joe Biden and UK Prime Minister Rishi Sunak.

Prime Minister Narendra Modi will not travel to Egypt. The Indian delegation is being led by Yadav, who will address the heads of states at the Sharm El-Sheikh Climate Implementation Summit on November 7 and 8.

Yadav will be speaking at the UN Secretary-General High Level Round Table to launch the "Early Warnings for All Executive Action Plan". He will also address an event on the MiddleEast green initiative.

At this year's conference, developed countries are expected to push developing nations to further intensify their climate plans.

On the other hand, the developing countries would seek commitment to finance and technology needed to address climate change and resulting disasters.

The UN climate summit this year is being held in the shadow of the Russian aggression in Ukraine and the related energy crisis which has strained the capabilities of countries to urgently tackle climate change.

COP27 will really begin on Monday with a World Leaders' Summit, where heads of state and government leaders deliver five-minute addresses summarising their efforts to fight climate change and what they expect from the conference.