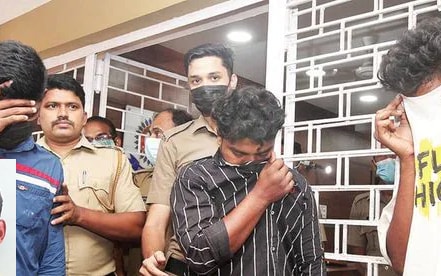 Palakkad: The police have arrested three individuals who were allegedly involved in the murder of a 27-year-old man named Rafeeq at Olavakkode here. The arrested individuals have been identified as Guruvayoorappan(23), Maneesh(23) and Soorya.

Notably, it was in the wee hours of Friday that Rafeeq was allegedly thrashed to death by a group of people. It is reported that the trio attacked the youth over the suspicion that he stole a bike. The group intervened after seeing CCTV visuals of a person stealing the bike. Though Rafeeq said that he did not steal the bike, they took him to a railway station nearby as his dress resembled the person who took away the bike. The gang could not find the vehicle and continued to thrash him.

Rafeeq suffered grievous injuries to the head and jawline. By the time police arrived, he was already in a lifeless state. Though the onlookers and police took Rafeeq to the hospital, the doctors confirmed that he succumbed to his injuries.

Later, the police identified the bike which was allegedly stolen by Rafeeq from another place. The cops informed that a probe is initiated on the matter.

According to the police, CCTV captured the visuals of the three who took Rafeeq to the railway station. The deceased is also a history-sheeter, said police.

Some reports said more people were involved in thrashing the person. However, police claimed that though there were around 15 people, only three attacked the person.

Meanwhile, the locals condemned the brutal murder of the youth. Some expressed shock over the fact that such an incident happened in their vicinity. Many pointed out that whatever be the matter, the people should have complained to the police instead of manhandling the person. ‘What for such a brutal act?’, many asked. They pointed out that those who witnessed the act heard Rafeeq pleading.