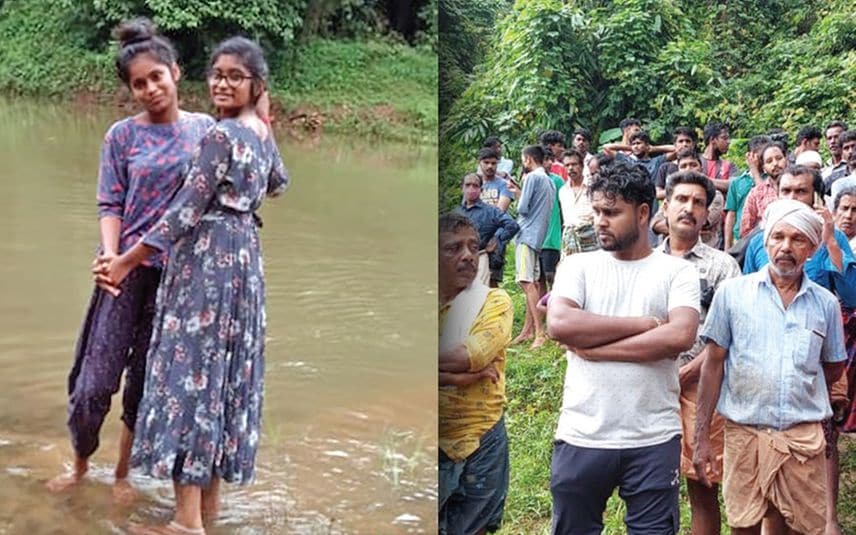 Aparna and Anugraha (picture taken just before the mishap), locals crowded at the spot | Photo: Mathrubhumi

Pathanapuram: A girl who fell into the Kallada river while taking selfie is yet to be traced. The tragic incident happened when Aparna (16) from Koodal and her friend Vellaraman native Anugraha (16) were taking pictures near the river.

Though Anugraha’s brother Abhinav (12) attempted to rescue the girls, he also was swept in the sudden undercurrents. He and his sister Anugraha were saved. Anugraha was admitted to Punalur Taluk hospital and later shifted to Govt Medical College in Thiruvananthapuram.

Aparna and Anugraha were tenth standard students of Mount Tabor High School in Pathanapuram. Aparna arrived at Anugraha’s home on Saturday and the friends went to take pictures from the riverside. When Abhinav could not find his sister at home, he went to the riverside. Unable to locate them, he searched the river. Abhinav also fell in the strong currents and was swept away. Fortunately, he saved himself by clinging on to a creeper. Later Anugraha was found lying on a rock on the riverside almost half kilometre away. The locals who rushed to the spot hearing the screams of Anugraha rescued her.

Even though Fire Force and police jointly searched the Kallada river to find Aparna, they were unsuccessful. Pathanapuram police informed that the search will continue on Sunday too. The mobile phone of one of the girls was recovered from the riverside and police found pictures captured from there.