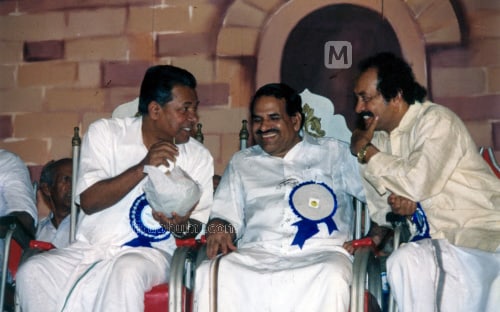 As a resilient figure in Kerala politics, Kodiyeri always remembered his roots and the hurdles he had to overcome in his childhood.

Balakrishnan always remembered events from his childhood. His emotional attachment to his mother, Narayani, goes way back to when his father, Kunjunni Kurup, passed away when he was 12 years old. Since then, the mother-son duo held a strong bond, which in a sense, helped Balakrishnan become the political figure we know today as 'Kodiyeri Balakrishnan'.

He watched his mother work on farms and reared cows to feed the family comprising young Kodiyeri and his four sisters. Kodiyeri once said that his mother sacrificed everything, even selling ten cents of land for his education. During his time in college, he used to walk to Mahe by foot after delivering milk cartons to houses in Table Gate near Thalassery.

Kodiyeri was perhaps remembered most in his childhood as an excellent orator, often speaking in competitions in school and later as a leader in his college. He was also an avid reader, eager to engage in debates about national politics and international events. His uncle, Nannu Nambiar, was the first to sow the seeds of communism in Kodiyeri. The number of books he read during the time shaped his view and the politics he wished to follow. While studying in the eighth standard, he joined the Kerala Student Federation (KSF) and later became secretary.

During his teenage years, he had a good relationship with the workers of the local beedi company. It was a time when communism was slowly establishing its presence in beedi companies of Kannur. He used to read newspapers to workers, and in return, his bus fares was taken care of by the workers.

Years passed and the familiar face in Kodiyeri started to become a familiar face among fellow communists and political rivals in Kannur. The early 1970s saw Kodiyeri joining students wing of CPM and in the subsequent years, followed by a national emergency which shaped his political career.

During emergency, the 20-year-old student leader, Kodiyeri, a well-known figure among authorities in Kannur, was arrested. Inside the police lock-up, he met MLA Pinarayi Vijayan, a young man from Kannur, beaten up by the police and unable to walk. Kodiyeri was tasked to look after Pinarayi Vijayan after they were moved to Kannur jail. This was the beginning of Pinarayi-Kodiyeri politics in Kerala and perhaps the beginning of modern Communism in the state.

Like every communist from the 70s, Kodiyeri witnessed the rise and fall of senior leaders, parties and even the notion of communism worldwide. However, he remained a staunch supporter of communism and was ready to defend it. Perhaps, he will be remembered for being an ideal communist who embraced change yet stands side by side with his fellow comrades for revolution to happen.