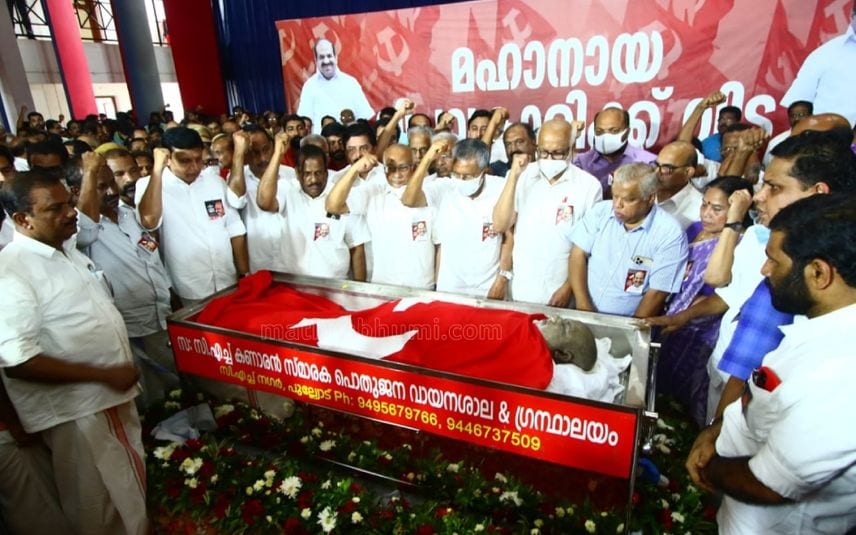 Kannur: The ambulance carrying the mortal remains of CPM leader Kodiyeri Balakrishnan reached Thalassery town hall here on Sunday. Thousands of people are seen gathering on the premises of the town hall to pay last respects to the leader.

Chief Minister Pinarayi Vijayan and other leaders received Kodiyeri’s body at the town hall. The body will be kept for public homage at the town hall till 10 pm on Sunday.

Kodiyeri Balakrishnan passed away at Apollo Hospital in Chennai on Saturday evening after a long-drawn battle with cancer.

His mortal remains reached Kannur airport at 1.15 p.m. on Sunday and the 23-km stretch from Kannur airport to Thalassery town hall was filled with huge crowds on both sides of the road.

While the CPM Kannur District Committee has made arrangements at 11 places for people to pay homage to Balakrishnan, the huge crowd has prevented the vehicle from being stopped in between.

The CPM leadership has decided that the ambulance carrying Balakrishnan's mortal remains should not be stopped in between and people should be allowed to have a final glimpse of his body at the Thalassery townhall, where his body will be kept till late Sunday evening after which it will be taken to his residence 'Kodiyeri' in Ingayil Peedika, Thalassery.

His cremation will be held with full state honours at Payyambalam on Monday at 3 PM.