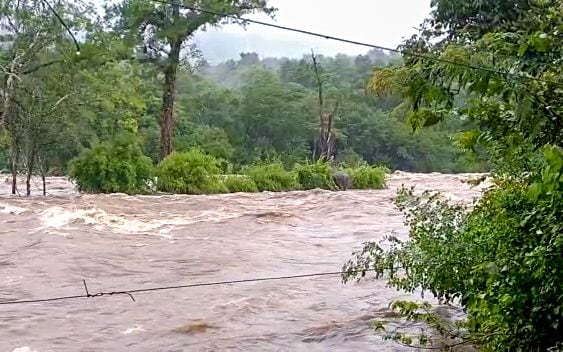 Thrissur: Places close to the Chalakudy river are facing a flood-like situation as the river is in spate. A team of the National Disaster Response Force is camping in Chalakudy to manage the rescue operations.

Residents are being evacuated from Koodapuzha, Pariyaram, Parakkadavu and Annamanada regions. Chief Minister Pinarayi Vijayan, minister K Rajan and P Rajeeve appealed to the people residing on the banks of the Chalakudy river to immediately shift to the relief camps.

Thrissur and Ernakulam districts are on high alert as the water level is increasing in the Chalakudy river. Low-lying areas close to the river is already flooded.

Water level in Chalakudy river is increasing due to the release of water from Peringalkuthu dam which had to open some of its shutters due to heavy rainfall in its catchment area and around 16,000 cusecs of water coming from Tamil Nadu, Thrissur district officials said, adding that people on the river's banks and nearby areas have been shifted to relief camps.

With the shutters of Chimmini dam also to be raised further in view of the heavy rains in Thrissur district, the water in Kurumali river -- which is already above warning level -- is expected to rise further, officials said.