Thiruvananthapuram: A study conducted as a part of the Thelineerozhukum Navakeralam initiative of Suchitwa Mission in local bodies has identified the presence of coliform bacteria in 79 per cent of waterbodies in the state.

49,016 samples out of the 62,398 water samples collected from waterbodies like rivers, canals and ponds contained bacteria which poses serious health risks.

The contamination has been mainly attributed to factors like septic tank waste.

The sewage from houses and establishment have been reaching the waterbodies without proper scientific treatment, the study also found.

The district-wise data on water contamination are as follows:
​ 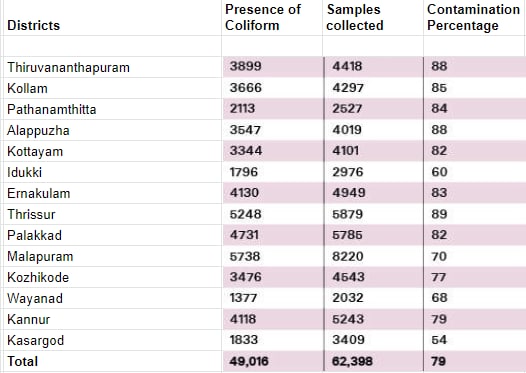 Relief for Kerala as Andhra Pradesh to ensure supply of essential commodities ...