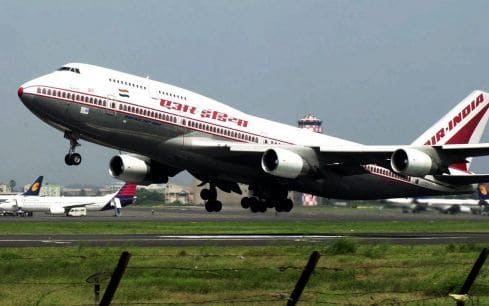 New Delhi: The Tata Group has taken its first step at Air India by introducing "enhanced meal service" in four flights that will operate from Mumbai on Thursday, officials said on Wednesday.

However, Air India flights will not be flying under the banner of the Tata Group from Thursday itself, they stated.

Earlier during the day, the officials had told PTI that the Indian government is likely to hand over Air India to the Tata Group on Thursday, nearly 69 years after it was taken from the conglomerate.

After a competitive bidding process, the government had on October 8 last year sold Air India to Talace Private Limited -- a subsidiary of the Tata Group's holding company -- for Rs 18,000 crore.

The officials said the new date from which all Air India flights will fly under "Tata Group's banner or aegis" will be told to the employees later.

The "enhanced meal service" will be served on Mumbai-Newark flight and five Mumbai-Delhi flights on Friday, they noted.

The "enhanced meal service" -- devised by the Tata Group officials -- will be expanded to more flights in a staggered and phased manner, the officials added.

"This recovery exercise is entirely illegal, and we demand that this anomaly is rectified and the amount due is repaid with immediate effect," a letter sent by the two unions said.

Additionally, two other unions have opposed the carrier's January 20 order to check grooming and measure the body mass index (BMI) of cabin crew members at the airports just before their flights.

These unions -- Air India Employees' Union (AIEU) and All India Cabin Crew Association (AICCA) -- on Monday wrote to Dutt opposing the order on the grounds that it is dehumanising and in violation of rules prescribed by aviation regulator the DGCA.

"BMI is a person's weight in kilograms divided by the square of height in metres. A high BMI can indicate high body fatness," stated the website of US' Centers for Disease Control and Prevention.

Three days after Air India's sale was announced on October 8 last year, a Letter of Intent (LoI) was issued to the Tata Group confirming the government's willingness to sell its 100 percent stake in the airline. On October 25, the Centre signed the share purchase agreement (SPA) for this deal.

Officials said all the formalities for handover are close to completion.

As a part of the deal, the Tata group will also be handed over Air India Express and a 50 percent stake in ground handling arm Air India SATS.

Tatas had on October 8 beat the Rs 15,100-crore offer by a consortium led by SpiceJet promoter Ajay Singh and the reserve price of Rs 12,906 crore set by the government for the sale of its 100 percent stake in the loss-making carrier.

While this will be the Centre's first privatisation since 2003-04, Air India will be the third airline brand in the Tatas' stable as it holds a majority interest in AirAsia India and Vistara, a joint venture with Singapore Airlines Ltd.