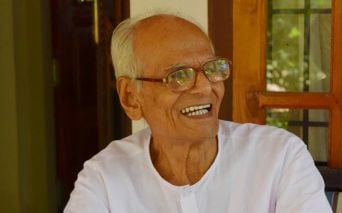 New Delhi: The Union government announced on Wednesday the list of Padma award winners for the year 2023. Malayali Gandhian VP Appukuttan Poduval (99) has been honoured with the Padma Shri.

Poduval is a freedom fighter who met Mahatma Gandhi in 1934 during the latter’s Payyannur visit. Poduval was influenced by his uncle Sreekanda Poduval and Swami Ananda Theertha, who attended the Salt March announced by Gandhiji.

Appukuttan Poduval was imprisoned for attending students' meetings in the 1940s. He was also active in the Quit India movement.

Post independence, Poduval took part in the Bhoodan movement of Vinoba Bhave. He has worked as a journalist and later became an employee of the Khadi Gramodyog Commission. He was a strong proponent of Khadi products.

Poduval will turn 100 in October this year.