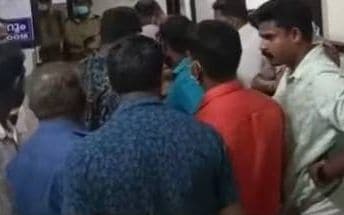 Alappuzha: A woman and her newborn died following a C-section at Alappuzha medical college on Wednesday. Relatives created a ruckus at the hospital after the two deaths were reported. The deceased are identified as Kainakari native Shyamjith’s wife Aparna (21) and her girl baby.

The newborn’s body has been shifted to the mortuary. Aparna’s relatives have filed a complaint against the doctors and hospital staff at the police station.

Aparna was rushed to the hospital on Monday. She started suffering labour pain on Tuesday evening. Following this, she was taken to the labour room. The relatives alleged that the gynaecologist was not present in the labour room and C-section was done by a group of medical students.

The hospital authority informed us that Aparna breathed her last due to lapses in administering anaesthesia, said the relatives.

The newborn child reportedly died on Tuesday night and the woman breathed her last on Wednesday morning. The relatives staged a protest inside the hospital soon after the baby was declared dead. Ambalapuzha Police rushed to the spot and controlled the situation. The hospital superintendent Dr A Abdul Salam has appointed a committee to probe the incident. The relatives alleged that the negligence of the doctors resulted in the death of the newborn baby and the Ambalappuzha police had recorded Aparna’s statement soon after the death was reported. Hours after this, she also died at the hospital.