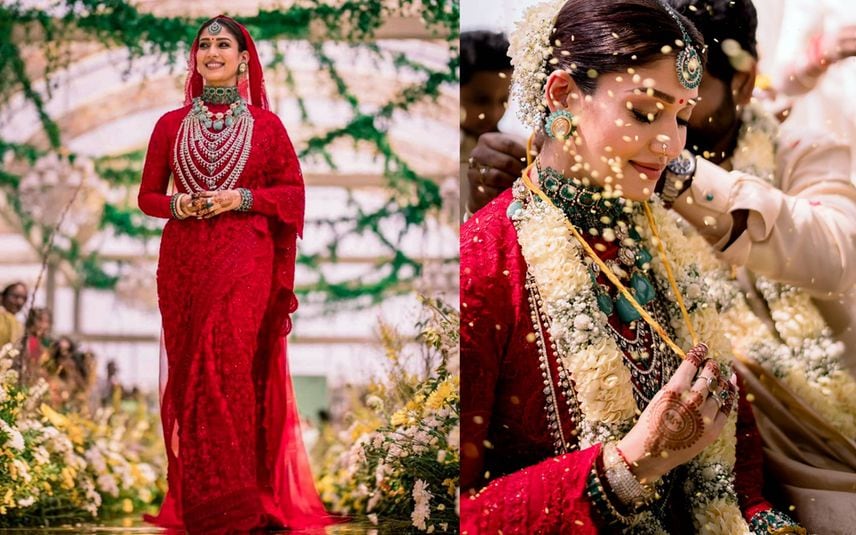 Lady superstar Nayanthara entered wedlock with her longtime boyfriend Vignesh Shivan in a grand wedding ceremony at a resort in Mahabalipuram on Thursday. The actress was an epitome of elegance in her bridal look.

Describing the outfit, the designers revealed that the intricately realized tone on tone embroidery is inspired by the carvings of the temples of Hoysala. Interestingly, observing Nayanthara’s love for tradition, the designers Monic and Karishma reimagined Goddess Lakshmi Motifs as bajubandh (armlet) on the sleeves of the blouse.

In addition, the Fourth Vow running across the ensemble has been personalized with the couple’s names, symbolizing togetherness, commitment and mutual respect, the designers explained.

Nayanthara’s sumptuous jewellery designed by Goenka India was another attraction in her bridal attire. She wore Zambian Emerald Choker, polki and large Russian tumble necklace along with satlada chain.

The satlada had seven lines of diamonds, rose cuts, polka and emerald in heritage settling. Heritage Polki and Cabochon Emerald Studs and an emerald and diamond maang tikka completed her look. She kept her hair tied in a sleek bun decorated with jasmine flowers.

‘Excited to see u walking up the aisle’,Vignesh pens emotional note on Nayanthara