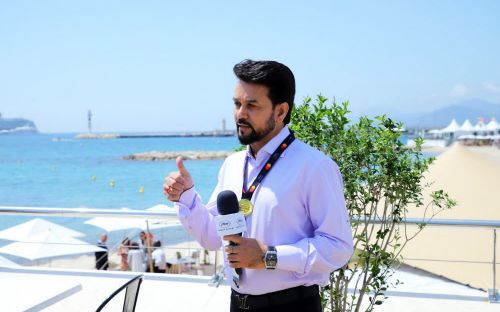 Union Minister of Information & Broadcasting Anurag Thakur at the India Pavilion at the Cannes Film Festival, in Cannes on Thursday. The pavilion opens tomorrow | Photo: ANI

Cannes [France]: Union Minister for Information and Broadcasting Anurag Thakur on Wednesday unveiled two schemes to incentivize the shooting of foreign films in India and to make India a favorite destination for foreign filmmakers.

The two schemes--Incentive Scheme for Audio-Visual Co-production and Incentive Scheme Shooting of foreign films in India-- are aimed at unleashing the potential of Indian media and entertainment industry.

Earlier on Wednesday, Thakur inaugurated the India Pavilion at Cannes Film Market 'Marche du Film' and said that Indian cinema is a story of human talent, triumph and the trajectory of New India.

"While reflecting the values, beliefs, and experiences of the Indian people, Indian cinema has also showcased their hopes, dreams and achievements. While being rooted in Indian culture, the Indian film industry has grown to acquire a universal character. And while preserving our age-old stories, the Indian filmmakers are innovating in their art of storytelling through use of technology," the Minister added.

He said that through the beautiful journey Indian cinema has inspired global filmmakers and also been inspired by them and 2020s are the best time to make art and films in India.

Speaking on the strong intent of the Government to make India a favorite filming destination, Thakur said, "We have a strong intellectual property regime, and the digital medium now complements the other more established modes of consumption and dissemination such as theatres and movies. This has brought about a democratisation of consumer choice like never before, and our government is intent on preserving this via support to the creative industries."Crediting our film restoration work for its scale, the minister said the Government has embarked on the world's largest film restoration project under the National Film Heritage Mission and as part of this drive, 2200 movies across languages and genres will be restored to their former glory.

He further said that India Pavilion is a feather in "our cap and only with your Vishwas and Prayas today, it will become the pioneer of the Indian dream tomorrow".

Anurag Thakur on Tuesday led the largest-ever Indian official delegation of eleven celebrities walking together on the inaugural event at the Cannes Film Festival. Mame Khan became the first-ever folk artist to open a Red Carpet for the Indian contingent.