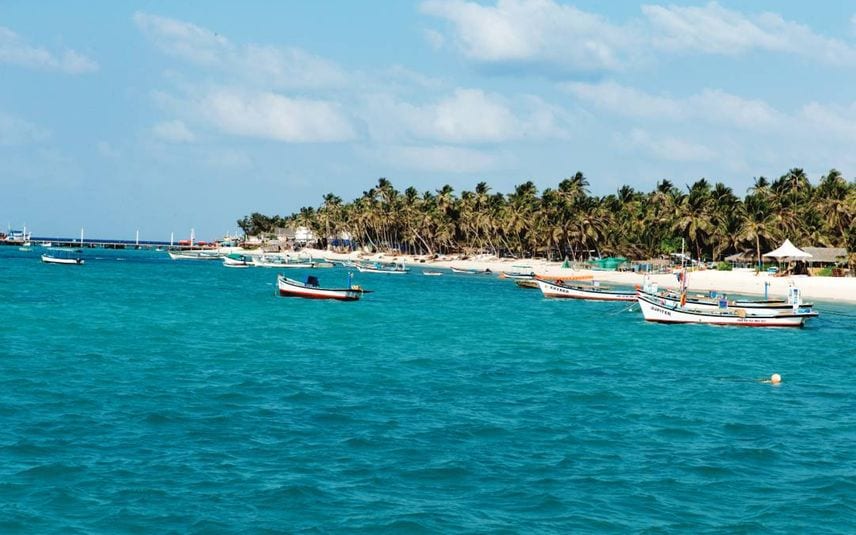 World renowned Hawaii is a state in the Western United States, located in the Pacific Ocean about 3,623.16 miles 5,830.92 kms from the U.S mainland. In contrast, Lakshadweep is only 496 kms from the coastal city of Kochi in Kerala. Hawaii is comprised of 8 major islands.

Lakshadweep, is a group of 36 islands, and is known for its exotic and sun-kissed beaches and lush green landscape. The name Lakshadweep in Malayalam and Sanskrit means ‘a hundred thousand islands’. Out of the present 36 islands only 10 islands are inhabited. Both Hawaii and Lakshadweep boast of incredibly stunning beaches, but the comparison ends here.

While Hawaii is a great success story of tourism, Lakshadweep lags far behind. Hawaii has transformed into an international exotic tourist destination. Hawaii is marketed and promoted as the “Paradise of the Pacific”, whereas India has not promoted Lakshadweep in a similar manner. Contrast to this, Maldives, which is only 820 kms away from Kochi has been extensively marketed as “The sunny side of life”. There are a plethora of facilities available from beach resorts, boutique resorts, hotels and guest houses, to suit every kind of holidaymaker. The sea is advertised as “Our pride and joy”, and the marketing focuses on underwater scenery and diverse marine life. India’s own major hotel chains are operating in Maldives, and contributing to the immense tourism promotion of that small nation. A total of 2,91,787 tourists from India alone visited Maldives in 2021. Compared to this, only a measly figure of 13,500 tourists reported by Lakshadweep in 2021. Maldives reported a total of 1.3 million tourists from all over the world in 2021. It is the same Indian Ocean that surrounds Lakshadweep, which surrounds Maldives also!

Hawaii, especially the second largest island of Maui received 2.3 million visitors inthe last year. Hawaii is being popularised as the “Rainbow capital of the world”. Tourism is Hawaii’s largest industry and netted $1.37 billion in 2021.

Predictably, the Honolulu International Airport is one of the world’s largest, busiest and most beautiful airports of the world. At any given daytime or evening hour, an estimated 10,000 people are in the airport complex as passengers, employees or visitors. Approximately 15,000 people work at the airport every day and another 20,000 depend on the airport daily for their livelihood. The State Department of Transportation Airports Division employs a workforce over 1200 employees statewide. While comparing this to the small airstrip in Lakshadweep, the Agatti Airport has just a single terminal, with one boarding gate currently handling only domestic scheduled flights. The capacity of this terminal is 25 each for departures as well as arrivals. There is one check-in and one security counter within the terminal that covers an area of 566 square metres.

Another island destination worth looking at is Bali in Indonesia. Bali is most famous for the thousands of islands in the Indonesian archipelago (more than 17,000). The busy island of over 4 million residents has been a tourist favourite for decades. The wide beaches in the south and lush, volcano-dominated interior attract close to 7 million foreign tourists per year! Denpasar International Airport is Indonesia’s second-busiest airport. Direct flights operate from Europe, the Middle East, China, Japan, Australia, Russia, and other eastern hubs. Foreign tourist arrivals from January to September 2021 stood at 1.18 million. In 2019, total visitors from India alone touched 657.300 and then reached 104.765 visitors in just the first three months of 2020. More tourists from India are visiting Bali overlooking Lakshadweep! Why is India failing to attract even domestic tourists into this exotic location?

The facilities available in Hawaii are admirable and cover not only tourist requirements but also enrich the life of the locals. The island State boasts of 16 colleges and universities Lakshadweep has just three colleges, there is no university, only a Centre run by Calicut University. Hawaii has 28 hospitals and a Medical University, whereas Lakshadweep has only one major hospital, and no university, not even a para-medical college. There are 11 US Military bases in Hawaii. It is home to the US Army Pacific Command, the MACOM of US Army Forces for the Pacific Region and the Army Corps of Engineers Pacific Ocean Division. Hawaii hosts over 300,000 military personnel and their families. Every branch of the military is represented in Hawaii, including the army, navy, air force, coast guard, and marines. The famous Pearl Harbor naval base is near Honolulu, Hawaii, that was the scene of a devastating surprise attack by Japanese forces on December 7, 1941. Of Lakshadweep’s 36 islands, only 10 are inhabited and this is a great security challenge for India. Lakshadweep gives India 20,000 sq. km of territorial waters and 4, 00,000 sq. km of EEZ. It is close to the Nine Degree Channel, 12 ships cross this channel every minute. The Indian Maritime Doctrine (updated version 2015) recognizes the Indian Ocean Region (IOR) as a “hotbed of narco-terrorism, smuggling, gun running and associated crimes”. The drug smuggling routes emanating from the Makran coast flow towards destinations in India, Maldives and Sri Lanka, through the sensitive ‘Southern Route’. Yet, India does not have a formidable military presence here. INS Dweeprakshak is a naval base of the Southern Naval Command of the Indian Navy located on Kavaratti Island in the Lakshadweep archipelago. There are also two Coast Guard Stations in Lakshadweep. But, the Chinese have reportedly leased Maldivian island of Feydhoo Finolhu Island until 2066 for $4 million, and are constructing a military facility there. The Chinese military base would be only 900 km away from Lakshadweep, and close to 1000 kms from the Indian mainland. Much needs to be done to bolster the defence infrastructure of the islands.

Viewed from any angle, the Lakshadweep islands hold enormous potential for development. These islands are also famed as “Coral Islands” as they have fringing coral reefs very close to their shores. It can be developed as a fascinating tourist destination that can rival Hawaii, Maldives and Bali. A few visionaries at the helm of affairs can deliver a path breaking initiative. Let us offer to the world ‘a coral experience’.