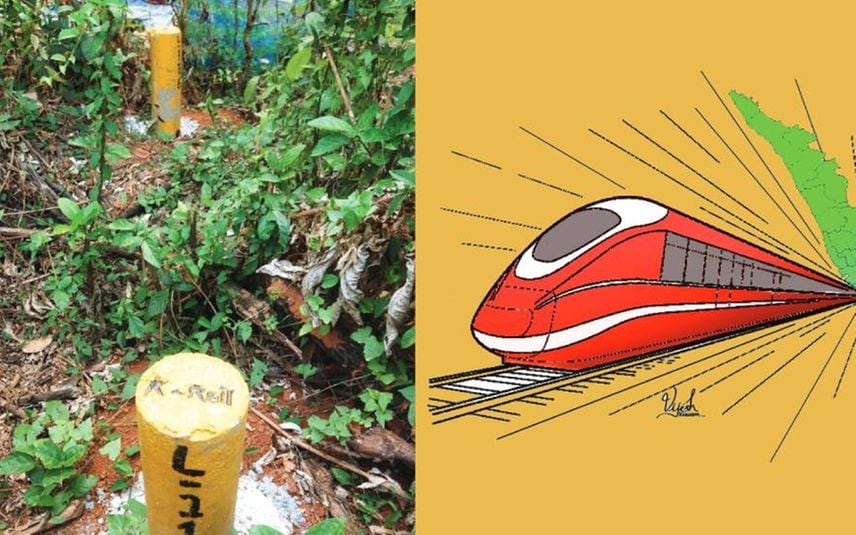 In the recently held by-election in Kochi, to begin with, the LDF and the UDF were like cats on a hot tin roof, visibly nervous in presenting their stance on K-Rail. Both the fronts subscribe to the neo-liberal paradigm of development. And the UDF was worried if it would be portrayed as 'anti-development' and 'not wishing Kerala to develop' if it was vocal in the electoral fora in opposing the rail project.

Afraid of an electoral backlash, the government called a stop to the yellow stone marker survey operations that had caused wide public protest and severe police repression.

Relatively, the UDF was at an advantage. In many parts of the state its activists had played a major role in anti-rail agitation. As the polling day approached, UDF was able to increasingly affirm that K-Rail is a luxury that the people of a pauper state like Kerala cannot afford. It was easy to draw people's attention to neighbouring Sri Lanka reeling under debt. More than the environmental aspect, it was the financial that the UDF harped on, its own paradigm of development not being too different from that of LDF.

Perhaps more importantly than the UDF campaign itself, the TV and newspaper images of the police crushing the anti-rail protestors, especially women and children, were fresh in memory as voters went to polling booths. These, all the glossy LDF brochures and full-page, colour advertisements on K-Rail could not erase.

Women had been in the forefront of the anti-Rail agitation. And they had been subjected to the worst forms of police repression. Pushed, dragged violently.

Did it cause a huge share of women voting against LDF, asks Dr KP Kannan, former Director, CDS. Women, irrespective of class, caste, and even the party? Including many women, who had never voted in their life, registering their first vote. A vote of protest.

Dr Kannan cautions that only a sample study of men and women voters, exploring the reasoning of their voting choice can help affirm this.

Of course, K-Rail is only one among a host of variables that explains CPI (M)'s pathetic defeat -- but it is an important one.

Equally, the LDF missed the fact that people now know that 'development' is not a pure and simple desi ghee. Critics of development, mostly from within the left, are growing. Even if numerically small, their calls to re-think the development idea have become a material force in society.

Is it possible that many of them voted against the LDF this time? And that the rail project was the prime reason behind this?

Gone with the Rail.