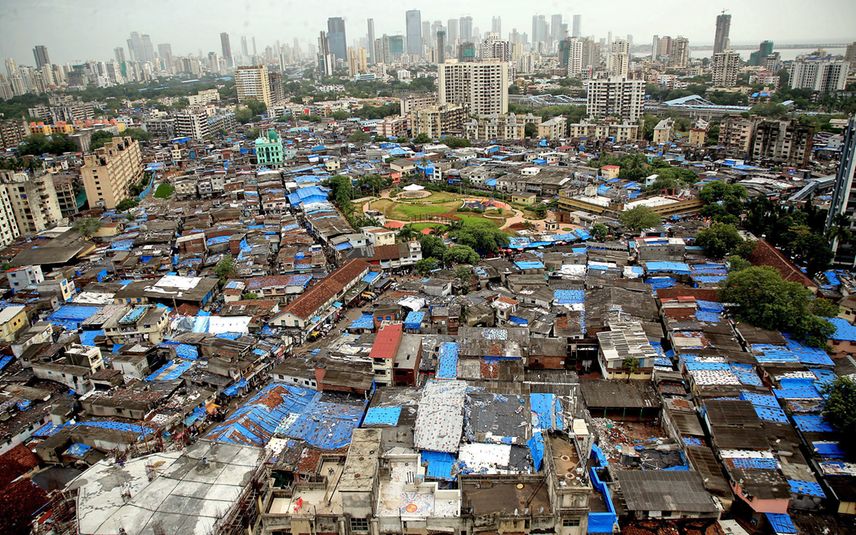 Mumbai is one of the world’s most densely populated cities. In the heart of tha cityt lies Dharavi, Asia’s largest slum which spreads across an area of merely 2.1 sq km. Dharavi literally means quicksand and since years the area lying in the central part of the city has been finding it difficult to come out of the clumsy image bedevilled by several problems. The world knows it as the setting of the 2008 Oscar-winning film Slumdog Millionaire. Amidst the busy train tracks the heavily polluted Mithi River separates the slum from Mumbai’s modern skyscrapers. The neighborhood is a maze of tiny alleys, each one full of scores of people, many living in tin shacks.

Families or groups of migrant workers often pile into a single room. Hardly anyone has a private bathroom. Even during the enactment of social distancing norms as a part Covid-19, it was sure that the region would have no such choice to follow them. However, it is a hub for several small-scale, unorganised industries that manufacture medicines, leather, footwear, clothes among other things.

Over the course of nearly two decades, successive governments in Maharashtra talked about revamping Dharavi, but it remained elusive. The revamp pursuit pegged a proposal form in 2018 . However, it did not make a headway due to multiple roadblocks. According to Uddhav Thackeray-led Maha Vikas Aghadi (MVA) government's statement in state assembly in March 2022, though the regime tried to get Railways' land crucial for the redevelopment project, the attempt did not evoke a proactive response from the Centre. This was despite the fact that the state government paid around Rs 800 crore for the transfer of land, it noted. In October 2022, just four months after the new Eknath Shinde regime dramatically seized power in the state, Railways handed over land for the Dharavi Redevelopment Project.

Bidding for the revamp project

The bidding for the revamp project involving players across the globe happened four times due to multiple reasons. Railway land issue, base bid price, eligibility issue, cost of construction materials are the major issues due to which the former the three bidding were scrapped. The process was also modified to get more bidders. In the fresh bid, conglomerate Adani Group's Adani Properties offered the highest bid for the 259-hectare revamp project. Adani Properties has offered to invest highest amount of Rs 5,069 crore for the initial investment in the Rs 20,000 crore project. It outbidded two other competitors -- DLF and Shree Naman Developers. Notably, the financial bids of only Adani Properties and DLF were opened since the third bidder, Shree Naman Developers, failed to make it in the technical bidding process. DLF, had quoted Rs 2,025 crore.

The total timeline for the rehabilitation project is seven years and provides housing, that could accommodate around 0ne lakh slum dwellers. Meanwhile, the revamp in near future will give Adani Group an option to milk high revenues. Because along with bid for rehabilitation, the government offers a sale component. The conglomerate can sell lakhs of square foot of residential and commercial space in central Mumbai. It will have wide roads, residential and commercial areas, schools, hospitals, gardens, playgrounds, and other amenities. The entire project including that of commercial space is expected to be completed within 17 years. The government has also given attractive offers for entities interested in operating in the commercial space.

What residents feel about the project

The eligibility criteria for the free housing scheme for slum dwellers is that they should be a resident before January 2001. They will be eligible for a house with a carpet area of 405 sq ft. While the people who lived in Dharavi between 2000 and 2011 can have the option for buying and hire purchase. Pertinently, worries on who will be left over eligibility remain. Most of the local residents expressed fear that redevelopment will kill the small businesses in Dharavi that it is known for and that they are content with the way things are at present. They said they are uncertain about what they will be offered after redevelopment.

Paul Raphel, who runs Dharavi Nagrik Seva Sangh said, "We are not happy as the land that houses Asia's biggest slum is being handed over to Adani Group. There are thousands of huts in Dharavi and four to five families reside in each hut. But after redevelopment, they will get only one flat, which may not be sufficient for them." More than 2,000 idli vendors reside in Dharavi and roam across Mumbai to sell the snack to make a living, he said. "But after redevelopment, such small businesses may get over. Those involved in manufacturing farsan (salty snacks), leather products, embroidered garments, imitation jewellery, among others, will be finished. The value of houses may increase, but there is a strong possibility that most of them will sell out the property and leave the place," he said.

Mahesh Ankush Kawle, a resident of Shastri Nagar in Dharavi said politicians and builders have started visiting the place to play with the sentiments of the local residents as elections are nearing.

"People speaking around 18 languages and engaged in different businesses reside here. These people (politicians and builders) are just playing with the sentiments of local residents. Dharavi is spread over 600 acres of land. It is a prime location in Mumbai with four to five railway stations located nearby," he said.

The redevelopment project is being carried out not for the welfare of the local people but for the personal gain of certain individuals, he alleged.

President of Dharavi Bachao Andolan, Ramakant Gupta, said, "The redevelopment project should be completed in time. The Dharavi Rehabilitation Project (DRP) was approved in 2004, but nothing has happened so far. In 1995, there were 57,000 shanties in the slum, but the number has more than doubled now and we assume that it is around 1,20,000."

"Around 50 per cent residents of Dharavi run small-scale businesses from their houses, and the population is around 12 lakh. We welcome the government decision, but it should be implemented in time," he said.

Local resident Ayyub Sheikh said a large number of foreigners from different countries visit Dharavi as tourists to see from close quarters its ethos and character.

"But once the huts are demolished (for redevelopment), Dharavi will lose its appeal and international identity. The locals will shift out of Mumbai once the redevelopment starts," he added.

Seventy-year-old Usha Bai, a resident of Tata Power in Dharavi, who has been selling fruits there since the last more than 30 years, also expressed unhappiness over the redevelopment project.

"We are happy here only as we don't know what's going to happen with us in future," she said.

Another resident Rajaram Upadhyay wondered what would happen to hundreds of religious structures in Dharavi. "We welcome the move, but everyone should get proper accommodation," he said.

Meanwhile, Adani Group has been facing protests across the globe for its various projects in countries like Australia and Myanmar for allegedly violating environmental norms and lobbying with politicians. The group has been accused of causing development-induced displacement. Incidentally, its Vizhinjam port project in Kerala has been facing stiff opposition from the residents.